Deprivation of health care in Iranian prisons is a serious danger to political prisoners including Narges Mohammadi. 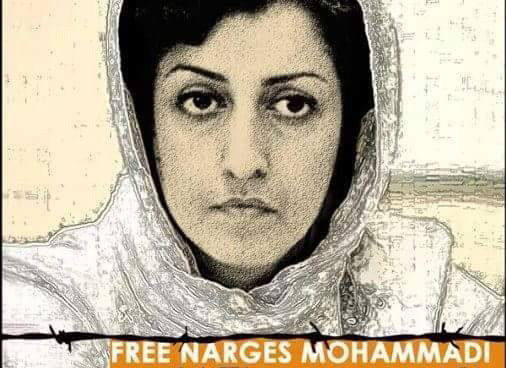 PEN Norway is deeply concerned by the health conditions of journalist, human rights defender, and honorary member of PEN Norway, Narges Mohammadi in Zanjan prison in Iran. Narges Mohammadi recently stated in a letter from prison that she and 11 of her cellmates had many of the symptoms of Covid-19. After pressure from her family, Mohammadi was given a COVID test on 8 July but the authorities have reportedly refused to disclose the results. In the letter, she mentioned the lack of hygienic items and bad and unhealthy food in the prison and the inattention of prison officials to the needs of sick prisoners. She had already objected to the barring of the right to have a regular telephone call to her children.

PEN Norway calls on the Iranian authorities to take immediate responsibility and care of Narges Mohammadi and the other prisoners’ health. Our most important demand is her unconditional release from prison and the opportunity to visit and talk to her children and family.

Narges Mohammadi has been sentenced to 16 years prison, and all of her charges are related to her human rights activities, including opposing the death penalty and protest against the violation of social and political rights.

Leader of the Islamic Republic

The Office of the Supreme Leader Islamic Republic Street

Head of the Judiciary

President of the Islamic Republic of Iran

And copy to the Embassy of Iran in your country. You can find embassy addresses here.

Narges Mohammadi is an Iranian writer, journalist and human rights defender, and Honorary Member of Danish, Belgian, Norwegian and Swedish PEN. She is the former Vice-President and spokesperson of the Defenders of Human Rights Center (DHRC), which advocates for human rights reform and represents political prisoners and prisoners of conscience in legal proceedings. She is serving a total of 16 years in prison for ‘gathering and colluding with intent to harm national security’,  ‘spreading propaganda against the system’ and ‘founding and running an illegal organisation’ for her work with the Campaign for Step by Step Abolition of the Death Penalty, known by its Persian acronym, Legam.

Mohammadi was imprisoned at Evin Prison in May 2015 where she was held until December 2019 when she was transferred to Zanjan Prison, some 300 km from Tehran, after she had staged protests against prison conditions and the killings of hundreds of protestors who were demonstrating against gas price rises in November 2019. She suffered bruising and other injuries while being transferred, described by Amnesty International as having been violent and a punishment for her prison activism.

On 22 February 2020, she was served with further charges for these prison protests on accusation of ‘spreading propaganda against the system’ and ‘assembly and collusion with intent to take action against national security’. Evidence against her reportedly includes staging sit-ins, conducting educational classes and ‘defaming’ the governor of Evin prison by asserting that that prison guards had used verbal abuse, death threats and beatings against inmates. She faces an additional five yearsin prison and 74 lashes.

Mohammadi suffers from a neurological disorder that can result in seizures, temporary partial paralysis, and a pulmonary embolism – a blood clot in her lung for which she is said to be denied essential medication that could prevent further clots forming.  In May 2019 she underwent an emergency hysterectomy after which she was returned to Evin Prison. In June 2019, PEN received reports that Narges Mohammadi was being denied adequate medical care and antibiotics to treat a subsequent infection resulting from the surgery.

As the COVID-19 pandemic took hold in Iran, its spread in prisons became a key concern and led in March 2020 to the release on furlough of over 85,000 prisoners. However, many political prisoners, including Mohammadi, remain imprisoned. Then on 13 July, in a letter from prison published by her family, she describes suffering COVID-19 symptoms, adding that other inmates had also contracted the virus. After pressure from her family, Mohammadi was given a COVID test on 8 July but the authorities have reportedly refused to disclose the results.

Narges Mohammadi has written for various reformist journals, among these Payam-e Hajar which was later banned for its articles promoting the rights of all, regardless of gender, religious or political affiliation. She is the author of political essays, including Reforms, strategy and tactics. She is married to the prominent journalist Taghi Rahmani, who spent a total of 17 years in prison then fled Iran for France in May 2011 where he now lives in exile with the couple’s teenage twins. Mohammadi has been denied telephone calls from her children for over a year.

Narges Mohammadi was an awardee of the 2013 PEN/Oxfam Novib Free Expression Award.