«This trial is about criminalizing and silencing journalism. There is no proof against me»

In a small court room in Istanbul, Erol Önderoğlu stood his ground against the charges made against him.

Today was the 11th hearing. On trial are Reporters Without Borders representative and IPI member Erol Önderoğlu, Turkey’s Human Rights Foundation Chair, Şebnem Korur Fincancı, and journalist Ahmet Nesin. The latter two could not make their statements in today`s hearing.

The three defendants are charged with «engaging in propaganda for a terrorist organisation», «incitement to commit a crime» and «praising criminal activities and those engaged in them». For what? A solidarity act – acting as guest editors in the «Editors-in-Chief on Watch» solidarity campaign for the shuttered pro-Kurdish daily Özgür Gündem.

One single day as a guest editor have cost several journalists and editors days, months and years of uncertainty, waiting for the court to decide their fates. Freedom is on trial.

The judges all seemed young and inexperienced. This is a common and very serious problem in Turkey, hence thousands of judges and other academics are dismissed or have fled the country.

«I doubt you are very well informed in human rights,» Önderoğlu told the judges.

Approximately 75 journalists, freedom of speech activists, international and national observers attended the hearing. Not all could fit in the few seats reserved for observers, and waited in the hallway as Önderoğlu finally got to deliver his statement.

This very strong defense speech will be published in English at norskpen.no as soon as the translation is completed.

The hearing was over in under an hour. Norwegian PEN met with Erol Önderoğlu, who is tired, but determined.

«Many of my colleagues have spent months and months in prison. At least I`m outside. But I am not free. After waiting more than two and a half years, it was a relief for me to express myself to the court. It’s very important to me that the court actually take my message into consideration, even if any independent practice in the terms of judiciary is highly unlikely.»

The case is now postponed to 17 July. Postponements are also a way of tiring out both defendants and the public.

The below-named freedom of expression organisations denounce the lengthy judicial harassment suffered by Reporters Without Borders representative and IPI member Erol Önderoğlu, Turkey’s Human Rights Foundation Chair Şebnem Korur Fincancı and journalist Ahmet Nesin and call for their full acquittal at the hearing on April 15, 2019, when a verdict is expected.

The three defendants are charged with “engaging in propaganda for a terrorist organisation”, “incitement to commit a crime” and “praising criminal activities and those engaged in them” for standing in as guest editors in the “Editors-in-Chief on Watch” solidarity campaign for the shuttered pro-Kurdish daily Özgür Gündem.

We further denounce the ongoing detention and prosecution of scores of journalists in Turkey as an autocratic attempt to silence all dissenting voices and to prevent independent journalists from carrying out their profession.

We offer our support and solidarity to our colleagues Önderoğlu, Korur Fincancı and Nesin, who have been subjected to a trial lasting almost three years, and we call on the Turkish government to cease such oppression of journalists, academics and writers.

“This case is about an act of collegial solidarity that should never have resulted in criminal proceedings. Turkey must cease violating the rights of journalists to disseminate the news and of the public to receive balanced reporting,”, Caroline Stockford, Turkey Advocacy Coordinator at the International Press Institute, said.

“By targeting prominent human rights defenders, the authorities aim to decimate what little remains of civil society in Turkey. They will not succeed. We stand united with our colleagues and insist that this relentless judicial harassment cease,” said Sarah Clarke, Head of Europe and Central Asia at ARTICLE 19.

“When the very act of solidarity for repressed journalism is criminalised in Turkey, international solidarity for our colleagues becomes even more crucial.” – Nora Wehofsits, Advocacy Officer at the European Centre for Press and Media Freedom (ECPMF)

“International public opinion should know that Turkey is not merely Erdogan’s Turkey. Like Erol Önderoğlu, Şebnem Korur Fincancı and Ahmet Nesin, there are many people and courageous initiatives that need to be heard about and be supported. This is why providing the international public with continuous and in-depth coverage on Turkey is so important today”, Chiara Sighele, OBC Transeuropa.

“We stand united in support of Erol Önderoğlu, Şebnem Korur Fincancı and Ahmet Nesin. We promise that we will do our utmost to support the journalists and to put pressure on the Turkish government to cease the prosecution and detention of journalists“, said Kjersti Løken Stavrum, Vice President of Norwegian PEN.

Özgür Gündem has long been targeted by Turkish authorities for its journalism. Last month the European Court of Human Rights (ECHR) ruled that Turkey had violated the right to freedom of expression in systematically bringing terrorism-related criminal cases against Özgür Gündem’s owner, Ali Gürbüz, between 2004 and 2005. 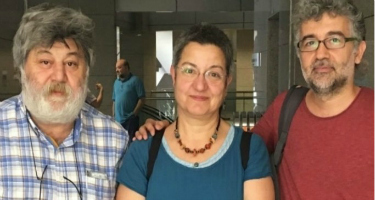 The accused’s and and their lawyers’ defenses base on:
(Only one example tells the story, all others are the same) 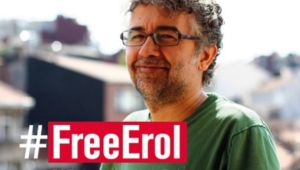