Over 40 lawyers comprising the legal teams for all 16 defendants in the Gezi Park trial in Istanbul on 28 January, walked out of the court and demanded that all three judges be replaced.

Norwegian PEN observed the 6th hearing in the trial in which sixteen civil society actors and figures who initially protested the illegal road through Istanbul’s Gezi park are alleged of attempting to overthrow the government with ‘force and violence’.

Although the charges, of having organised the country-wide, spontaneous protests in 2013 by using foreign funding, are the same for all 16 defendants, only Osman Kavala is being held in pretrial detention.

Kavala has been in prison in Silivri since November 2017. On 10 December, 2019 the European Court of Human Rights ruled on his application and declared violations to his rights to liberty and security and to his right to a fair trial. The Court went further, declaring that Kavala’s detention was politically motivated, and ruled for his immediate release.

In the hearing observed by Norwegian PEN on 24 December the court defied the ECtHR ruling, saying that it was unsure whether such a ruling was final.

In the hearing this week on 28 January, the court once again ignored the ruling and sent Osman Kavala back to his cell.  Kavala’s lawyer, Ilkan Koyncu said he fears the court will now try to speedily convict Kavala before the ECtHR ruling passes out of the appeal period of 3 months. ‘The court no longer has its sights on justice or the law,’ he told Bianet news 29 Jan, ‘It is seeking to reach its decision on the case before the 10th of March when the ECtHR ruling moves to its implementation stage.’

During the hearing on 28 January the lawyers walked out in protest at the judges decision to hold the 5th hearing of the case in secret. The lawyers protested the fact that lead plantiff Murat Pabuç was cross-examined by the judges with the Prosecutor present, and yet the lawyers and defendants were both denied access to the hearing in person and by audio visual relay. The judges claimed that, as lead plantiff, Pabuç’s ‘life was in danger.’ The legal defence teams took this to mean that the judges implied a threat to his life from the lawyers themselves. They declared the private interrogation a violation of the ‘equality of arms’ and also inadmissable as evidence in the trial. They petitioned the judge for the removal of this evidence and, when this was rejected, they declared a lack of confidence in the judicial panel and walked out of the room in protest.

Their walk-out was greeted with applause by the public gallery of some 300 persons. This turned to booing at the judges and the military police, whose presence always dominates these hearings were ordered to clear the public gallery.

The trial went on with only a handful of CHP and HDP politicians observing along with approximately 50 international observers, diplomats and members of the press.  The judge attempted to cross examine Osman Kavala in the absence of his lawyers and this was challenged by CHP MP Sezgin Tanrıkulu who is also head of the Parliamentary Human Rights Committee.  Mr Tanrıkulu was then ordered from the room by the judge, something which is not allowed due to the immunity of members of parliament.

The judges has lost control of the room and, one could say, were never in charge of the trial as it is suspected that heavy political pressure is being put upon them by Turkey’s administration to secure a conviction of the defendants.

This trial comes 9 years after the Gezi protests which were a spontaneous civil outburst against the building of an illegal road in one of the few remaining green spaces in Istanbul. The protests spread across the country and involved over 3 million people. Many of the protests were against the excessive use of police violence. Six people died during the Gezi protests and police were accused of firing tear gas cannisters directly at people’s heads.

It is thought that the uprising of everyday citizens at the time of Gezi seriously alarmed Turkey’s authoritarian government. This trial is seen as a move by the government not only to punish the activist and civil society leader Kavala, but to criminalise the constitutional rights of assembly and demonstration themselves. After closing 53 newspapers in 2017 and criminalising hundreds of journalists the state has moved on from the media to civil society itself.

Outrage of addition of murderer to list of plaintiffs

The most outrageous recent development in the Gezi hearing was the addition to the long list of plaintiffs of ex-policeman Mevlüt Saldoğan who was convicted of the murder of 22 year old Ali Ismail Korkmaz during the Gezi protests in 2013.  Saldoğan is claiming that his family life and career were damaged due to his 13 year conviction for murder. He was released from detention after serving 2 years. He is further claiming injury to his feet after beating and kicking the young Eskişehir student to death in 2013. The mother of Ali Ismail Korkmaz had travelled from Antakya to be at the hearing and was heard to twice shout, “I am Ali Ismail’s mother!’ during the hearing. The judge replied, ‘I understand your pain. But this policeman was also beaten with sticks and stones.’

In the early afternoon on 28 January 2020 the lead judge read out his interim decision, denying all of the requests of the defence lawyers in relation to all clients and ruling for the continuing detention of Osman Kavala, an innocent man who has already spent 27 months in solitary confinement in Turkey’s biggest prison.

The next hearing is set for 18 February. It is not clear whether the judicial panel will be replaced or if the defence lawyers will attend. What is clear is that the rule of law, as well as European law, is being constantly and deliberately flouted by Turkey. The fault in theory is not the Turkish judicial system or the laws themselves. The Turkish constitution is robust and declares that the European Convention on Human Rights takes precedence over all domestic law. The problem here is a singular one. It is one man, bent on revenge, by whose hand all members of the Council of Judges and Prosecutors are chosen.

The solution, is concerted and serious pressure by European states on Turkey to release Kavala and the urgent intervention by the Secretary General of the Council of Europe. The reputation of the European Court is being directly threatened by Erdoğan. The Vice Presidency of the Parliamentary Assembly of the Council of Europe has just been handed to Russia’s Pyotr Tolstoy.  Don’t the other states have anything to say?

We, the undersigned freedom of expression and media freedom organisations, strongly condemn the court’s interim decision on the Gezi Park trial to continue the detention of civil society leading figure Osman Kavala at the end of the third hearing of the case, on 8 October 2019.

The judicial panel of the 30th High Criminal Court sitting at Silivri High Security Facility in Istanbul upheld the prosecutor’s request for the continuing detention of Kavala in Silivri. The next hearing was set for 24-25 December 2019. We believe that the decision against Kavala’s release and the very continuation of this trial contravenes international human rights standards and is a clear demonstration of the lack of a functioning judicial system in Turkey.

We call for the case against all 16 defendants to be dropped and for Kavala and human rights defender Yiğit Aksakoğlu to be compensated for the time they have spent in prison.

Doubts over the independence of the court panel were cast by many, including lawyer Can Atalay, defendant in this case. While giving oral evidence at court in his defence, Atalay commented that the changes in the judicial panel made by the Council of Judges and Prosecutors are indications of the lack of impartiality of the judiciary. As such, he argued that it was in contravention of Articles 36 (right to a Fair Trial) and 37 (right to a Natural Judge) of the Turkish Constitution, and in violation of the right to a fair trial as enshrined in Article 6 of the European Convention on Human Rights.

The lack of independence of the judicial panel has been proved beyond doubt today. In a case where there is neither evidence nor cause to detain the defendant Kavala in prison for one more day, the decision was given for his continued detention. By the time of the next hearing in December, Kavala will have spent over two years in prison for no tangible legal reason. We call for the entire case to be dropped and for this surreal and illegal process to be brought to a close.

A decision on Kavala’s case remains pending before the European Court of Human Rights. Today’s proceedings underscore the disintegration of the rule of law and domestic remedy in Turkey, as the defendant – who has already spent over 700 days in detention – is ordered to remain in pre-trial detention– on completely baseless charges. We urge the European Court of Human Rights to speedily rule in this case.

We urge the Turkish Ministry of Justice to put an end to such practices where punishment is meted out ahead of possible conviction and to commit to the abolition of extended pretrial detention, as the Government outlined in the recent Judicial Reform Strategy, by immediately freeing Kavala.

We also call upon all diplomatic missions and all other international observers to attend the next hearing on 24-25 December 2019 to records the proceedings and show their continuing support for the defendants. 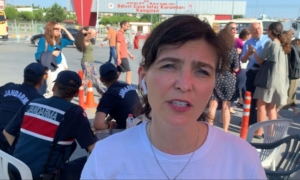