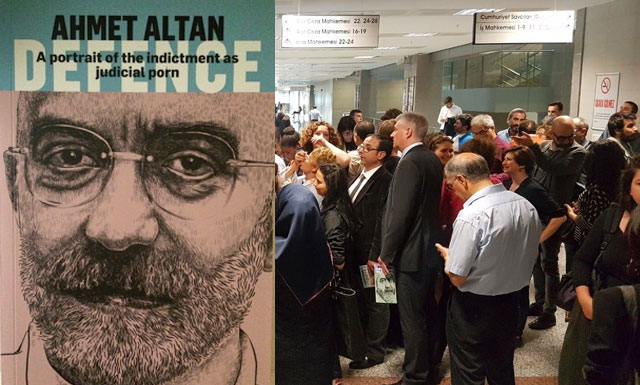 The case against Ahmed Altan and his brother Mehmed Altan is the beginning of a long day’s journey into a dark night in Turkish legal history.

The trial started Monday, June 19, with chaos outside the courtroom, where many international observers, family, friends, acquaintances and supporters wanted to observe the proceedings.

After waiting for a long time, the case was moved to another courtroom in this Kafkaesque palace, Caglayan in Istanbul (the world’s largest) before it was postponed for several hours due to the sound system. That’s how they work to get rid of bothersome listeners. In the end, we started in a small room in order to exclude half of the attendants.

And, dear reader, I ask you to continue reading, in order to be involved in the legal madness that is about to start in Turkey. For the case against Ahmed Altan and brother Mehmed Altan, also author and journalist, is the beginning of a long day’s journey into a dark night in the Turkish legal history.

Following the coup attempt last summer, not one single sentence has yet been passed, and the cases are only now starting. There are over 100,000 cases related to the event queued up for the constitutional!

In the case of the brothers Altan, 17 people are grouped together in one case to make it more effective. Several of these 17 have nothing in common and do not know each other, they are randomly merged. Only some of them are present in the courtroom, many of them have fled and already live in exile.

The Altan brothers were arrested on 10. September last year and have been in custody since, in the famous prison Silivri, one hour’s drive west of Istanbul.

If you happen to be there, you will be presented to guards who can proudly showcase the world’s biggest prison! Not only that, but it is also the prison in the world which, as per today, has the most journalists and writers imprisoned, currently more than 170 people.

The Altan brothers were informed about the arrest through a twitter message containing a list of “journalists to be arrested.” The following day, this was repeated in the pro-Erdogan newspapers, and subsequently the police arrived and arrested the Altan brothers.

The indictment was announced in newspapers

Just as bad with the indictment. They were told that it was secret until it was published, some time ago, in all pro government newspapers – once more. Only then did Ahmed Altan know what he was charged with. And with what?  To know someone!

“First, let me ask this,” Ahmed Altan opened in court, “how can knowing someone be accepted as the evidence of a crime?”

The main foundation for the brothers’ participation in the coup on July 15 is that they both participated in a live TV show the day before. The program is ironically called Özgür Düsünce (Free Thought). The program can still be viewed in its entirety on youtube.

Talked about the coup

During the program they were talking about President Erdogan, that he cannot stay in power much longer, that there will be a new election in two years, and then Erdogan’s days may be numbered. Likewise, they also talked about the possibilities of a coup, and that coups are a part of Turkish history.

This talk about a coup means that the prosecutor believes they must have known about the coup the following day and that they must have been participating. The free thought and speech has become the paranoid state’s confirmation of a coup. It’s tempting to add that we, who have seen James Bond, know that if you’re a coup maker, you do not talk about it on a talk show the day before.

Consequently, Ahmed and his brother are accused of wanting to “overthrow the Turkish government, prevent the government from performing its duties, be a member of an armed terrorist organization and spread propaganda for a terrorist organization.” For this, they may risk a penalty of three times the life sentence + 5 years. The fact that the state adds five years demonstrates how it plays on the irrational and at random.

The accusations against Ahmed Altan is over 200 pages, but that is easy when several of the witness statements and charges have been copied in several times. The court obviously did not care about proofreading.

Similarly, Ahmed Altan’s defense speech is 60 pages, and fortunately for us foreigners, translated into English. Altan´s text is in itself a literary piece of work about a judicial parody that could easily be a historical document from this era in Turkish history. Because ultimately, it is the literature that survives!

Writing about women, men and God

If anyone has asked the question who is this Ahmed Altan really? I can add that several of his books have been translated into English, and recently, while the author himself was in jail, his last book, “Endgame” was published.

It is difficult not to read the book as an allegory of today’s Turkey, while it is unmistakably Altan in the descriptions of the sexually released woman and the difficult interaction between man and woman. The passages of the conversation with God about who is really the best writer, God or the author himself, are cleverly done in a country where you should write intelligently about religion if you want to survive.

Whoever wins the endgame is not yet settled. In a conversation I had outside the courtroom with the son and daughter of Ahmed Altan, they say that their father is in a good mood and in good condition.

Still they are only allowed to meet him one hour every Friday, and all they say is recorded and can be used against their father. But, as also his son and daughter say, his books are free, they are still translated into a variety of languages and travel freely around the world.

Judgment of the judges

In his defense speech, Altan ends with citing the English writer John Fowles – that all judges in the world will ultimately be judged for their decisions!

The judges of Turkey have a lot to answer for. Every day, between 300 and 500 cases from Turkey arrive at the Strasbourg Human Rights Court. And here, in the palace of Istanbul, we have only just begun.

On June 21st, there was a case against nine people associated with the Kurdish-friendly newspaper Özgür Gündem, and then on June 22nd the case against the writer Asli Erdogan and Necmiye Alpay, and then, in the coming days and weeks and months, cases against over 100,000 others – journalists, writers, teachers, nurses, attorneys and judges.

The judges will have a busy time and ultimately they will not judge, because the judges, as Altan finish his defence, “are the one who will be judged.”