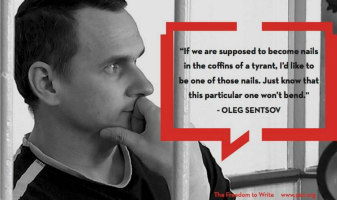 Accused of terrorism, writer and filmmaker Oleg Sentsov has been sentenced to 20 years imprisonment. He has not had a fair trial and it is believed he has been subjected to torture.

PEN International and The Norwegian Writers in Prison Committee hereby urge you to release writer and filmmaker Oleg Sentsov from prison immediately.

Oleg Sentsov was arrested and sentenced to 20 years in prison by a Russian military court, accused of terrorism. We fear that Sentsov was imprisoned for his opposition to Russia’s occupation of Crimea. Should there in fact be grounds for prosecution, these should be heard by a civil court under Ukrainian law.

Sentsov has been on a hunger strike since May 14th 2018 and we have reason to believe that he has been subjected to torture.

PEN International and The Norwegian Writers in Prison Committee strongly urge you to respect Oleg Sentsov’s human rights, including his right to a fair trial, the prohibition of torture and inhuman or degrading treatment as it pertains to hunger strike and his right to medical attention.

We also call upon Russian authorities to return all Ukrainian nationals arrested in Crimea and now held in Russia to Ukraine, and free all held solely for the peaceful exercise of their right to freedom of expression.