Today PEN Norway monitored the second hearing in the dissolution case against the women’s platform ‘We will stop femicide’.

The organisation is accused in a civil case, brought by a men’s anti-alimony network, of ‘degrading the morality of the family’ by providing pro-bono legal support to families of murdered women. The organisation offers help, say the victims’ families, when the police and Ministry of Justice do not. 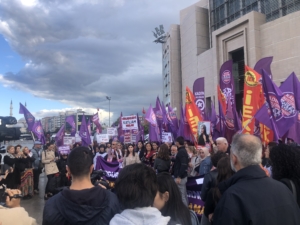 Hundreds of women and family members of the deceased traveled from all over Turkey to attend the trial. Family members spoke both in the hearing and in the plaza outside the courthouse in advance, telling of how the organisation had helped them to bring their murdered daughters’, sisters’ and mothers’ killers to justice.  “This case is one that should never have been brought,” Lawyer Ilayda Öner told PEN Norway, “It has no legal basis. Our organisation has been audited annually, in a faultless manner, for years. The case is claiming that we have been acting in contradiction to our aims and objectives.”

She explained that the case had been brought when a network of men calling themselves ‘Victims of Alimony’ began to send identical complaints to CIMER, a governmental complaints mechanism.  Over one hundred complaints were said to have been copied from one another, containing the same wording and spelling mistakes. These complaints claimed that the anti-femicide platform was disrupting the fabric of the family in Turkey. They further claimed that lawyers in the organisation had engaged in terror propaganda for sharing posts on social media in 2016 at a time when Turkish armed forces made heavy military incursions into the south east of the country.

The prosecutor initially returned the case file, demanding concrete evidence. However, the prosecutor was then dismissed and a new one appointed. He agreed to instigate a case against the platform and requested the files of any cases pertaining to past and present members of the organisation.  It is understood that 16 such files, all of which resulted in acquittals, have now been sent to the judge.

Under the relatively new Associations Law, any director or board member of an association who has been convicted of a terror offence can be dismissed from the association and said association can be shut down and have its assets seized.

During the hearing, at which representatives of the diplomatic missions of Sweden and the Netherlands were present, the judge heard petitions from the fathers, mothers and daughters of women murdered by their husbands.  Each person giving testimony said that they would always stand by the ‘We will stop femicide’ platform whose members had been with them at every court case and every demonstration throughout the legal process. At the end of the hearing the judge dismissed each one of their petitions to join the case, including a young woman whose mother was stabbed nine times by her father and who joined the association in order to help other women. “When I was looking for the most effective way to end my own life after my mother’s death, I found this organisation online.  I joined then and women now call me on my mobile asking for advice because they are suffering domestic violence. I direct them to the association. But if these women have to call a student like me for help in the first place, it means we have a very big problem.”

Prior to the hearing, hundreds of riot police were bussed in, deploying barricades to contain the womens’ press conference on the plaza opposite the Palace of Justice. A drone hovered overhead as hundreds of women and supporters gathered under banners for a press conference in which lawyers and victims’ families shared their views. During the press conference  PEN Norway’s Turkey Adviser also made a statement, saying: “A country that respects women is a country that should enforce the Istanbul Convention.”  Turkey withdrew from the Convention on 21 March last year. According to one lawyer, the Convention was “signed away with one signature” at a time when between 1-5 women a day are killed by their partners, ex-partners or relatives in Turkey. 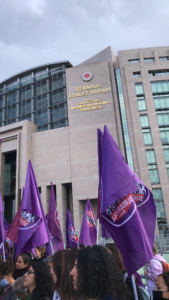 During today’s hearing the case, on 3 October, of a judge working in the offices of the Judges’ and Prosecutors’ Council who killed his wife with a shotgun before committing suicide was brought to the court’s attention.  The public at large in Turkey are highly critical of the Ministry of Justice’s commiseration message regarding the perpetrator on social media, whilst they failed to name his wife or to make any admission of the fact of her murder.  The family of the murdered woman say that she was a prisoner in her home for 12 years and that her phone was illegally tapped by her husband, a judge, who worked as an office chief in the Support Services Department of the Council of Judges and Prosecutors at the Ministry of Justice in Ankara.

“This court case against our organisation is a waste of our precious time,” lawyer Hülya Gülbahar told the judge, “since the last hearing of this case, 114 women have been murdered. There are still people out there who cannot get the help they need. They have nowhere to go.”

Today’s hearing lasted just over one hour; the judge ruled to accept the defence’s witnesses at the next hearing and to give the defence ample time to study any new case files received. He refused the petitions of family members of the deceased to join the case and adjourned the case until 11 January, 2023.

PEN Norway will return to monitor the next hearing.

“In April 2022, namely one year after the Istanbul Convention was abolished on 21 March 2021, data was released showing that 302 women were killed by men during this one-year period, and the deaths of 254 women were recorded as suspicious deaths.”

PEN Norway’s legal adviser writes about the case due to be hear in Istanbul on 5 October, 2022 in which the Prosecutor is proposing to shut down a women’s NGO aimed at preventing femicide in Turkey.

Tomorrow, 5 October, PEN Norway’s Turkey Adviser will be in the court room monitoring this important case for women all over Turkey. The femicide epidemic in Turkey shows conclusively the dire need for Turkey to rejoin the Istanbul Convention protecting women and girls.