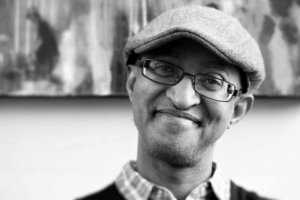 Poet Haile Bizen Abraha (b. 4 December, 1966) hails from the Eritrean capital, Asmara.  Although formally educated in Educational Psychology at Addis Ababa University in Ethiopia, Bizen showed early promise as a young poet, gaining momentum and recognition for his unique style by winning competitions across Eritrean high schools, contests at the national level in Ethiopia, and at Addis Ababa University.  After Eritrean independence, Bizen also won the first Eritrean Festival in the categories for poetry and short stories.  In 1995, he began work as a journalist for the Political Affairs department of the PFDJ (People’s Front for Democracy and Justice, Eritrea’s ruling party), and as an editor for Hidri Publishers (also owned by the party).  Bizen also served as a board member for Hiwyet, a private magazine, and the National Literary Prize Committee.

After thirty seemingly interminable years of civil war, Eritrea finally achieved independence from Ethiopia in May of 1991.  Bizen describes these first years of liberation as “years of inspiration and euphoria”, brightly colored by “family reunions, homecomings, stories of heroism, and future ambitions and dreams”.  This peace was disastrously short-lived, and conflict started anew with the border dispute between Eritrea and Ethiopia escalating into war from 1998-2000.  During this time of dramatic change, Bizen began to feel the constricting grip of despotism, and he gravely remembers, “all artists became under one command”.  In 2000, he published a collection of short stories; because he, like the rest of the nation, was preoccupied by war for three years, his stories themes’ echoed thoughts of conflict and its effects.

Bizen, along with a multitude of others, marks 2001 as the “official death of our new Eritrea”: on 18 September, the government ordered the closure of all privately-owned media outlets, officials were detained if they dared to question the lack of implementation of the newly-ratified 1997 constitution, and twelve prominent journalists were disappeared – presumably imprisoned and held incommunicado to this day.

At first, Haile Bizen envisioned himself as a “young artist in a young nation”, though eventually, he says, “that hope started to melt, that dream started to evaporate, and every citizen was reduced to government property”.  He describes these as “years of limbo”, permeated by military round-ups, arbitrary detentions, and security surveillance.  Bizen completed his National Service under PFDJ for three years without receiving remuneration, while fighting to keep his personal and artistic integrity intact.  He became obsessed with the word ‘silence’, and the concept of graveyards, which was reflected in his self-published collection of poetry, Bidhri Ma’exo’ (Behind the Doors).

Ironically, the ‘silence’ that occupied so much of Bizen’s thoughts, was the very thing that propaganda chiefs and national security agents sought to impose upon him – somewhere along his journey for poetry and self-expression, he had become a dissident, subject to repeated interrogations and intimidation.  Forced to flee in a matter of weeks, his departure obscured in a cloud of secrecy, Bizen left Eritrea in September of 2009 without explanations or farewells to his closest friends, or even his family – his children (only two and four years old) and his wife, six months pregnant at the time.

Bizen was unprepared for the realities of the next three years as an asylum-seeker, moving between Uganda, South Sudan, and Kenya, until finally an opportunity was presented by ICORN in 2011 for him to be resettled in Norway as a guest writer.  Bizen describes these interim years as characterized by long unproductive periods of writer’s bloc.  Despite the mountain of new experiences and potential material, Bizen felt a lack of concentration, plagued by the desperation of his new voice: “the voice of nothingness, the voice of agony, the voice of despondency”.  Though he remained optimistic for a reunion, Bizen’s communications with his family were scarce, fearing that his contact would imperil those back home, still living under state surveillance.  Eventually, his family managed to leave Eritrea and join Bizen in Norway, but only after paying thousands of dollars in ransom for their release from human traffickers; he confides that, “still, as a family, we are struggling to cope with the psychological and physical trauma of the torture and harassment”.

After prolonged silence, Bizen began to open up in 2014, knowing that he and his family were safe and settled in Kristiansand.  After commencing Norwegian classes, he began to translate children’s stories from Norwegian to Tigrinya, and “Karius og Baktus” was published by Cappelen Dam.  Bizen has also published an Ebook in celebration of Norway’s 200-year Jubilee, with one poem for each article of the Constitution.  He credits this publication with the reigniting of his poetic consciousness which in turn led to a productive period of original poetry and translations between 2015 and 2016.

Inevitably, his first poems from Norway were colored by deep anger and nostalgia for the things he was forced to leave behind; themes revolving around home, displacement, and his ‘new space’ led to the online poetry series “Ode to Exile”, as well as contributions to the Norwegian PEN guest writers’ Anthology, A Manual for Writing a Whore Poem (Instruks i å skrive horedikt).

Apart from the obvious benefits of better material resources and an increased sense of security, Bizen enjoys the connections his new home has allowed him to foster with writers from various countries who have shared similar experiences.    He comments, “I have been invited to different literary festivals and readings which continue to inspire me to produce new works.  It similarly opened up for me [the opportunity] to explore many talented writers from other countries.  Yet, I still remain eternally tied to my home country, and can’t [seem] to budge psychologically”.  Of course, in living an entire lifetime under conflict, war becomes an integral part of one’s identity; Bizen’s sense of self has been forged as much by fear, politics, and sadness, as it has by poetry, family, and beauty.

Recently, however, an opportunity to engage positively with his lasting connections to Eritrea presented itself– at the annual PEN International Congress, held in September 2016 in Ourense, Spain, Haile Bizen was officially announced as the new President of PEN Eritrea.  The organization currently operates in exile, since the restrictions on freedom of expression are so severe in Eritrea, with the country consistently ranked last in the world in the World Press Freedom Index (RSF) for the past eight years.  Alongside the continuation of his writing, Bizen has been working tirelessly in cooperation with Board Members, as well as partners in Norwegian PEN to propel PEN Eritrea forward as an initiator of political and cultural change.