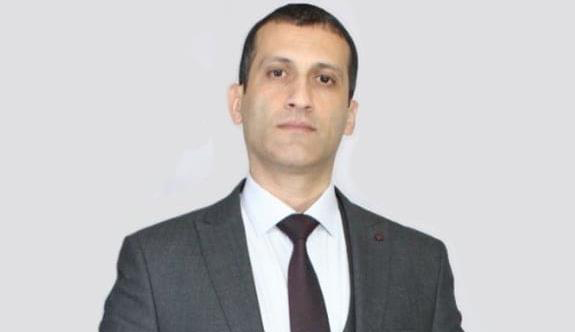 We call on the Azerbaijani authorities to free reporter and lawyer Elchin Mammad.

Human rights lawyer and journalist Mammad was arrested in his home on March 30th, only days after he published a critical report on the human rights’ situation in Azerbaijan. He was arrested on alleged charges of jewellery theft.

Elchin Mammad has faced harassment and intimidation by the authorities several times in the past. This prosecution fits a pattern of targeting critical voices with politically motivated arrests on spurious charges. We believe that Mammad’s recent arrest and detention is politically motivated. We worry for his situation and his health in regards to imprisonment during the covid-19 outbreak.

We therefore ask that you immediately release Elchin Mammad.

We furthermore call on Azerbaijani authorities to stop the persecution of journalists and human rights defenders, and to immediately release all those held in prison for having exercised their rights to freedom of opinion and expression.

Freedom of expression situation worsens in aftermath of Eurovision

(ARTICLE 19/IFEX) – 25 June 2012 – The International Partnership Group for Azerbaijan (IPGA), coordinated by Article 19, condemns recent actions taken by the Azerbaijani authorities to limit freedom of expression and freedom of information. In the aftermath of the Eurovision Song Contest, the authorities have targeted critical journalists and activists and adopted legislation which contradicts international freedom of information principles. These moves occur against the backdrop of an overall alarming freedom of expression situation, which must be urgently addressed.

The IPGA expresses its deep concern regarding the alarming state of freedom of expression in Azerbaijan, which has significantly worsened in the weeks since the Eurovision Song Contest was held in Baku in May 2012. The IPGA is particularly concerned by the following recent developments:

Persecution of journalists and activists
On 21 June 2012, Talysh-language Tolishi Sedo («the voice of the Talysh») newspaper editor-in-chief Hilal Mammadov joined the ranks of Azerbaijan’s journalists behind bars as he was arrested on charges of drug possession. On 22 June 2012, the Nizami District Court in Baku sentenced him to three months of pre-trial detention. Mammadov has denied the charges and said he believes he has been targeted for political reasons. A previous editor-in-chief of Tolishi Sedo, Novruzali Mammadov, died in prison in 2010 while serving a 10-year sentence on politically motivated charges of high treason. The Talysh are a minority group who mostly live in the southern regions of Azerbaijan near the Iranian border.

Photographer and journalist Mehman Huseynov is viewed by many local campaigners as «the first victim of Eurovision». He was detained for about 24 hours from 12-13 June 2012 on criminal hooliganism charges before being released, and faces up to five years’ imprisonment as the charges still stand. Huseynov, who is affiliated with local rights group the Institute for Reporters’ Freedom and Safety (IRFS), was active with the Sing for Democracy campaign, which used the Eurovision Song Contest as a platform to promote democracy and human rights in Azerbaijan. The charges against him stem from an altercation with police during an opposition protest on 21 May 2012, which Huseynov was trying to photograph.

Kur Civil Society activist Ilham Amiraslanov remains in detention following his arrest on 8 June 2012 on charges of possession of arms and ammunition. In a letter circulated by the Azerbaijani media on 19 June 2012, Amiraslanov reported that police planted the weapon on him and carried out acts of torture against him. Amiraslanov is the second Kur activist to be targeted recently as the group’s coordinator, Ogtay Gulaliyev, was released on 13 June 2012 after spending nearly two months in detention. Gulaliyev faces up to three years in prison as the hooliganism charges against him still stand. Kur Civil Society has been outspoken about the rights of local residents in the Sabirabad region in the aftermath of the mass flooding in the region in 2010, claiming that many victims have not been properly compensated by the authorities.

Justice has not been carried out in the cases of journalists Idrak Abbasov and Khadija Ismayilova, who were very publicly critical of the authorities in the run-up to Eurovision. Abbasov, a correspondent of IRFS and Ayna and Zerkalo newspapers, was severely beaten to the point of hospitalisation on 18 April 2012 by a group of employees of the State Oil Company of Azerbaijan (SOCAR) while filming their demolition of houses in his village. SOCAR later blamed Abbasov for instigating the attack. Ismayilova, an investigative journalist with Radio Free Europe/Radio Liberty (RFE/RL), was subjected to a particularly vicious personal attack as a sex video of her filmed by hidden camera was posted online after she refused to be silenced by a previous blackmail attempt.

The trial of Khural newspaper editor-in-chief Avaz Zeynalli continues. Zeynalli, who has been in detention since October 2011, faces up to 12 years’ imprisonment if convicted on politically motivated charges of extortion, tax evasion and failure to implement a court decision. The charges were based on Member of Parliament Gular Ahmadova’s claims that Zeynalli attempted to blackmail her.

Other journalists and activists remain in detention or jail in connection with exercising their right to freedom of expression, including Anar Bayramli, Ramin Bayramov, Vugar Gonagov, Zaur Guliyev, Aydin Janiyev, Taleh Khasmammadov and Ilham Suleymanov. Although nine activists imprisoned during the March and April 2011 pro-democracy protests in Baku were released by presidential pardon on 22 June 2012, two remain in prison: political activist Shahin Hasanli and human rights defender Vidadi Iskenderov.

Restrictive legislation
On 12 June 2012, the Azerbaijani parliament adopted legislation limiting the right to access information by allowing Azerbaijani companies not to disclose information pertaining to their registration, ownership structure and shareholders. This legislation was introduced following the publication of a series of articles by RFE/RL correspondent Khadija Ismayilova exposing the private business interests of the president’s family. The same day, the Azerbaijani parliament also adopted legislation granting the president and first lady lifetime immunity from criminal prosecution.

Finally, despite the provision in the «National Action Programme for increasing the efficiency of human rights and freedoms in the Republic of Azerbaijan» that defamation should be decriminalised in 2012, at present, defamation remains a criminal offence. Civil defamation provisions continue to be misused to hamstring the ability of independent and opposition media outlets to operate, as evidenced by the 13 June 2012 verdict of the Yasamal District Court in Baku, ordering Azadliq newspaper to pay AZN 30,000 (approximately GBP 25,000) to the head of the Baku City Metro, Tagi Ahmadov, and the recent defamation lawsuit filed by Azerbaijani Airlines against Yeni Musavat newspaper demanding AZN 500,000 (approximately GBP 408,000) in compensation.