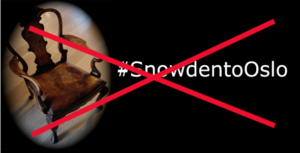 PRESS RELEASE FROM NORWEGIAN PEN:
On 21st April 2016, Edward Snowden filed a lawsuit, with Norwegian PEN as the intervention party, against the State by the Ministry of Justice and Public Security. The action’s purpose is to legally establish that Norway has no right to extradite Snowden to the United States. Snowden’s alleged crime consists of having exposed mass surveillance under the auspices of the American intelligence agency, the NSA. His actions are of a political nature and he cannot therefore be extradited to the United States, according to the Norwegian Extradition Act and International Law.

On 18th May the State, by the Ministry of Justice and Public Security, delivered a response to our writ of summons. In the defence’s reply, the Attorney General seeks to dismiss the lawsuit on formal grounds. Then State argues that the case should be handled in accordance with criminal procedure and the plaintiff’s civil action cannot be initiated on formal grounds.

Norwegian PEN stresses that the State has not acknowledged the core issue: the recognition of the political nature of Edward Snowden’s actions, and consequently the necessity of his guaranteed safe arrival in Norway to receive the Ossietzky prize without danger of extradition.

The fact that the State, on formal grounds, is attempting to avoid a judicial review of the Extradition Act and secure Edward Snowden’s safe passage to Norway, confirms the importance of the case from a freedom of expression point of view. The outcome could lead to the gagging of a historically important free voice.

By awarding Edward Snowden the Ossietzky prize, Norwegian PEN seeks to create a debate surrounding the international legal framework on mass surveillance.  We seek to protect and strengthen the role of whistleblowers nationally and internationally and to praise Snowden’s unselfish and personal integrity and courage by warning us all against illegal surveillance.

In a letter from Oslo City Court of 19 May, the plaintiff is granted the opportunity to submit comments to the State’s response before 26 May.

The case is being diligently pursued by our lawyers, Halvard Helle and Emanuel Feinberg at Advokatfirmaet Schjødt.