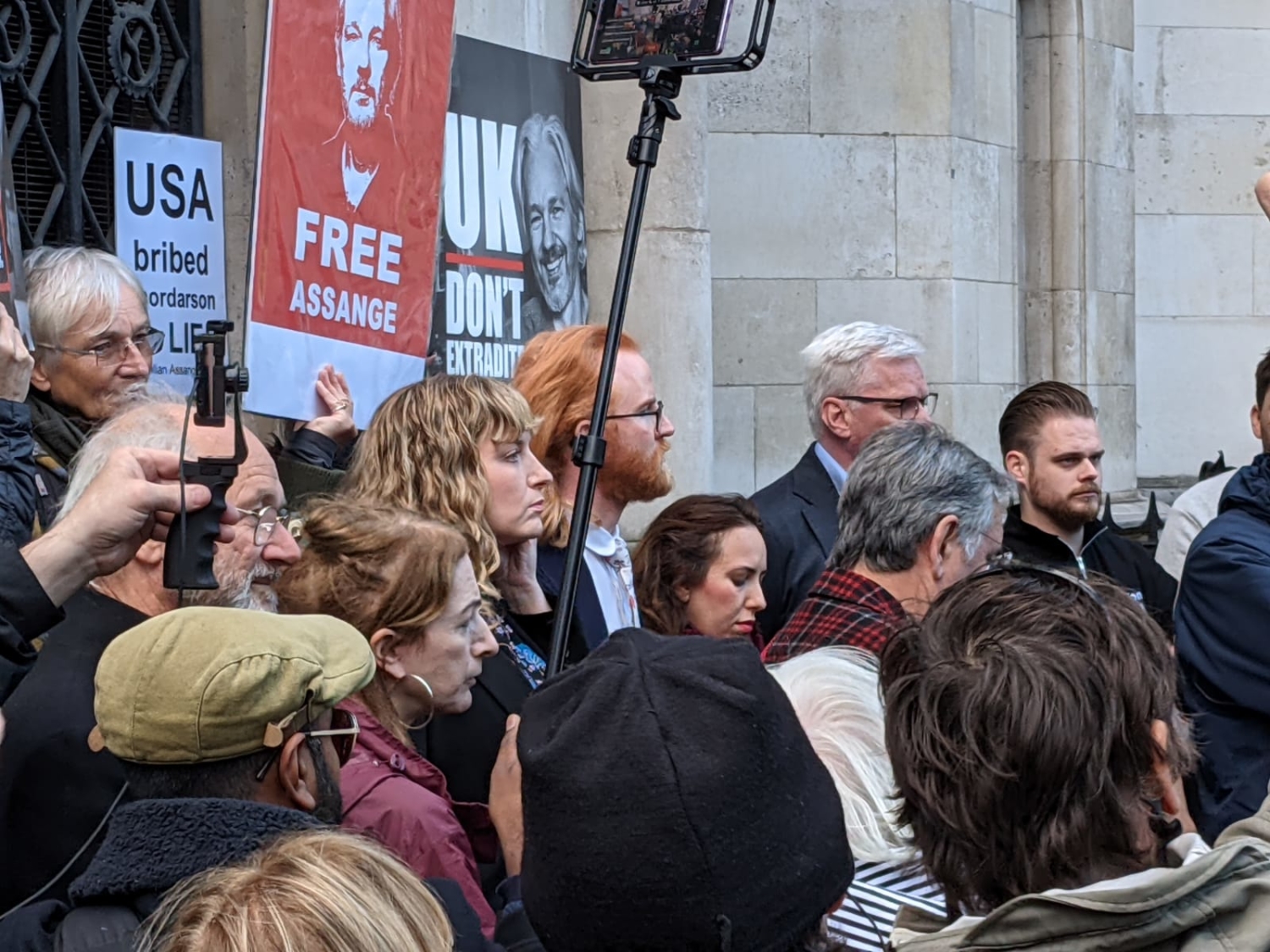 A risk of suicide or not? The court’s decision will define Julian Assange’s case

Julian Assange’s two-day trial concluded yesterday. The United States continued to argue for the extradition of Assange by undermining the risk of suicide. – It is as expected, but disappointing, says Rune Ottosen, head of PEN Norway’s Whistleblowing Committee, who followed the case in the Court of Justice in London on video link.

Rune Ottosen has followed the case closely since it became known in December 2018 that the American prosecution authorities had issued a secret indictment against Julian Assange. Ottosen explains the focus of this week’s hearing: – This case has been limited to the United States’ appeal of the ruling in January where extradition was blocked due to the risk of suicide. The core of the case, regarding the publication of secret documents that revealed serious war crimes and the right to publish this information, has therefore not been a topic in this hearing.

Together with around 150 activists, civil society actors and representatives from the press, PEN Norway was also present outside the courtroom in central London. PEN Norway’s representative and observer, Sara Whyatt, whose full report you can read here, reported that there were a lot of engagement outside the courtroom. Whyatt says that Assange’s case as one of the most bizarre cases she has seen:

– In my many years as a freedom of expression advocate monitoring trials in countries across the world, the Julian Assange trial is one of the most bizarre. The complexities of the hearings and the breaches of international standards by the UK and US governments, both of which are otherwise are seen and pride themselves as upholders of democracy is extraordinary. I can only agree with those who were gathered round the court that the charges against Assange should be dropped and that he should be freed.

Whyatt also got a comment from Stella Morris, Assange’s partner, who said that: – If the United States wants to treat Julian fairly and well, they should drop this case immediately. They should release Julian from prison because he is suffering right now. In court today, Mark Summers QC, Julian’s defence, said that there is nothing normal about this case.

Undermining the risk of suicide

Attorney Fitzgerald, who represents Assange, stood firm against the United States’ attorney, James Lewis, who continued to downplay the risk of suicide. He pointed out that Judge Vanessa Baraitser interpreted the law correctly when she, in her decision January 2021, rejected Assange’s extradition based on the high risk of suicide. He further emphasized that if Assange is extradited, he will be cut off from his family and network, which will further increase the risk of suicide.

– The question of the risk of suicide is crucial, and it is upsetting to see how the United States persistently downplays the well-documented risk of suicide. The conditions in the American high-risk prison will be intolerable for him. There is talk of isolation most of the day, minimal contact with others, little time for exercise and outdoor activities, and he will not be allowed to communicate with people outside. There is no doubt that this would increase the risk of suicide. The United States has tried to “sweeten the pill” by ensuring very humane prison conditions and by pointing out that he can apply to be transferred to a prison in his home country Australia.

However, Assange’s lawyers have pointed out that there are no guarantees that he can apply for prison time in Australia.

– In addition, the US avoids talking about the core of the case, which is about Assange publishing, rightfully, documentation about their war crimes, Ottosen says. Should the United States win this round, the case will be fully reviewed in a new court hearing.

Judge Baraitser said it was reprehensible, but understandable, that Kopelman was reluctant to reveal sensitive matters about his family situation. Attorney Fitzgerald also pointed out that all security matters needs to be ensured for Assange’s family, which was emphasized by the recent revelations that there were very specific plans from the CIA to kidnap Assange from the embassy and kill him.

Not present in the courtroom

On the first day of the trial, Assange joined the hearing digitally from Belmarsh prison, which was justified based on his medical condition. However, Stella Morris pointed out on Twitter that Assange actually wanted to be present in the courtroom, but that he was prohibited.

– One of the most shocking components of this hearing is the absence of the main character. We got a glimpse of Assange on the first day and he looked miserable and very thin. It’s clear that this is a troubled man. On the second day, he was not even present digitally. This underlines the clear need to release him immediately.

The courts verdict is expected in the next few weeks.

Photos from outside the Court of Justice in London on 27 and 28 October 2021 (photo: Sara Whyatt) 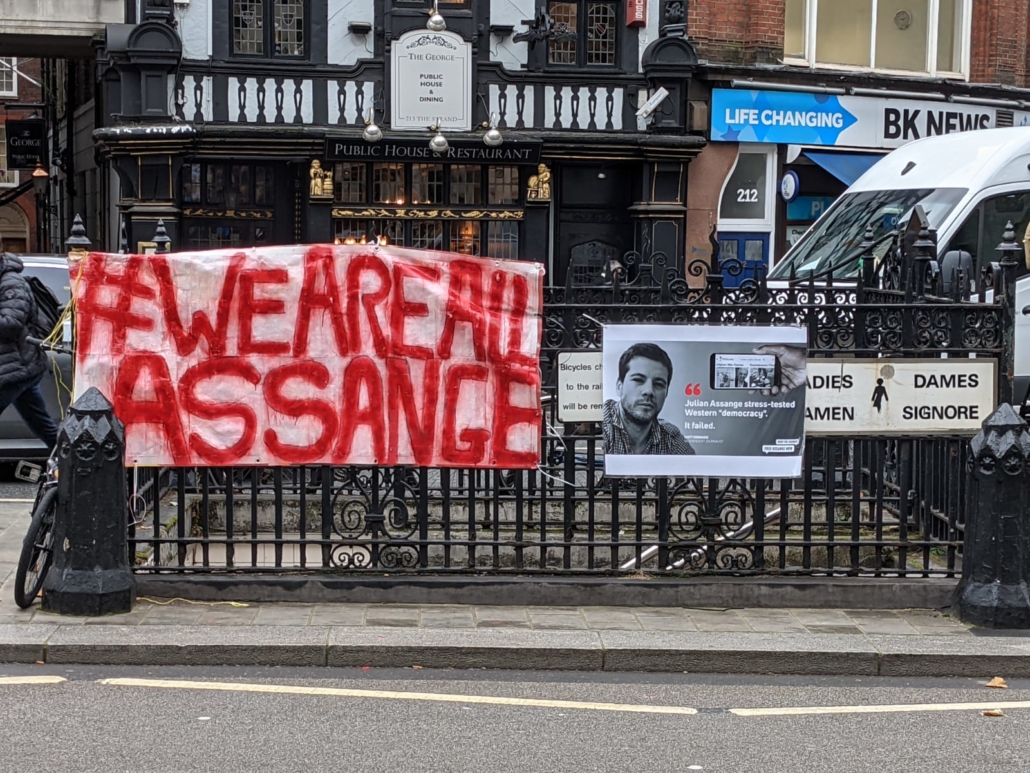 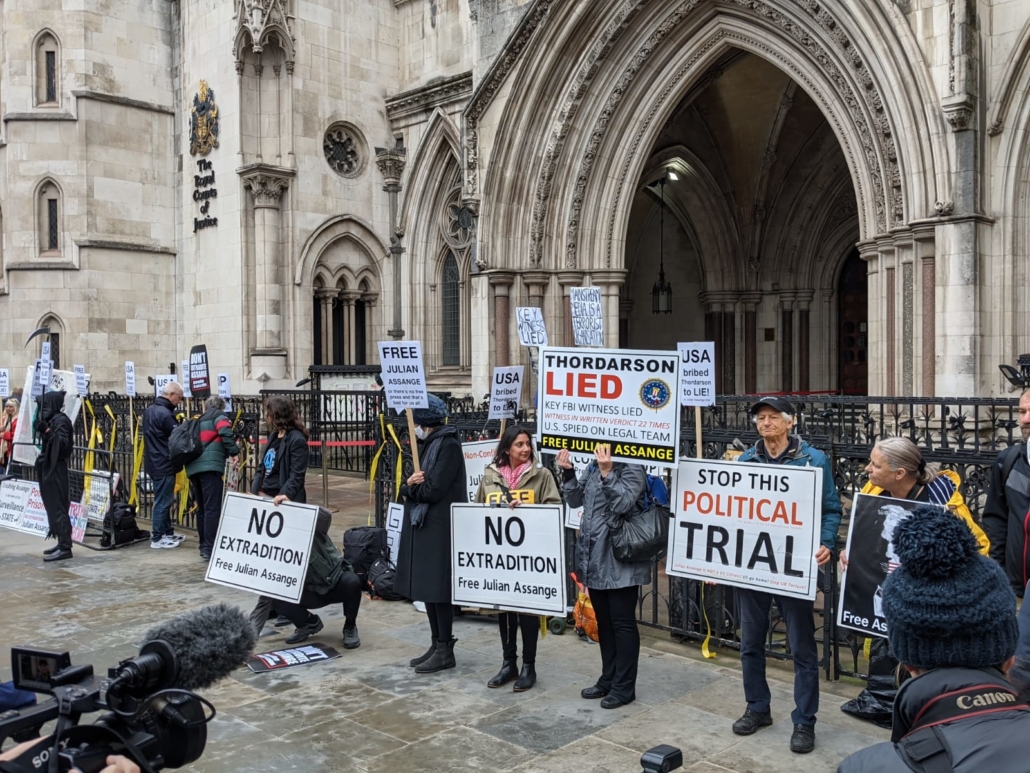 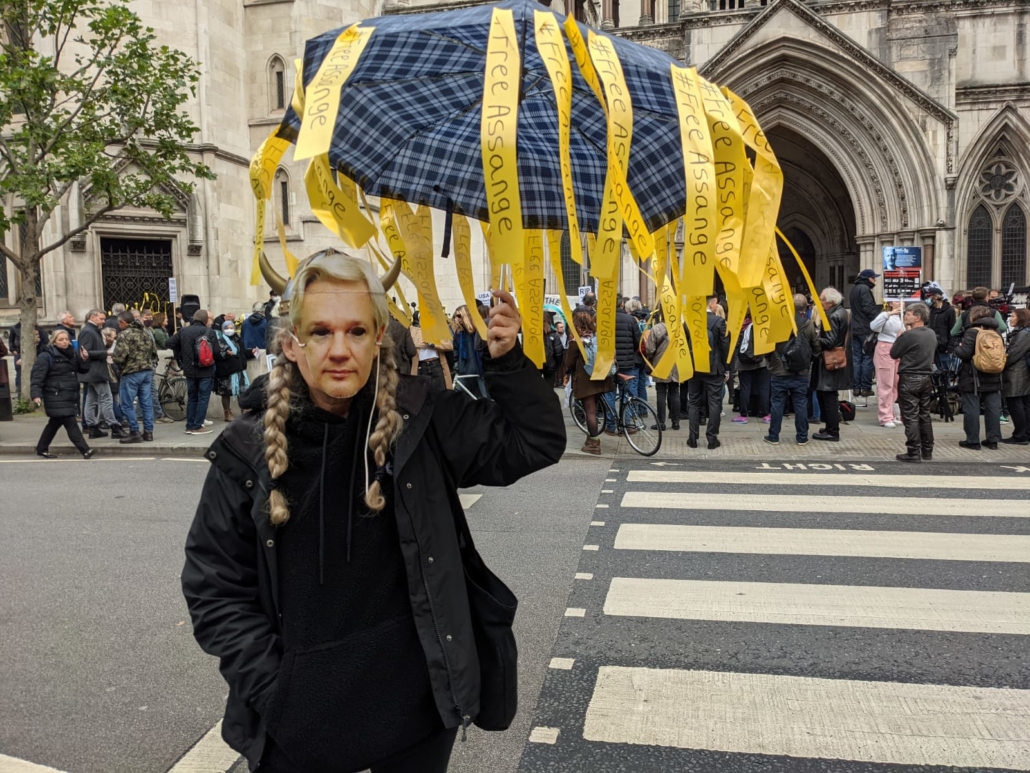 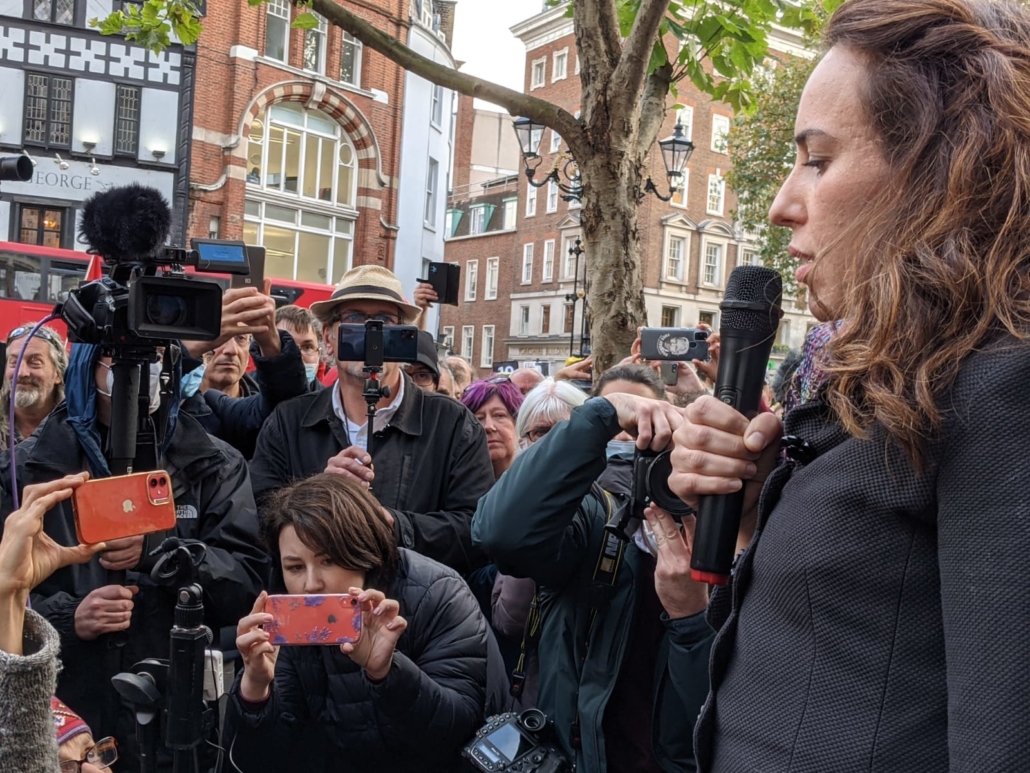 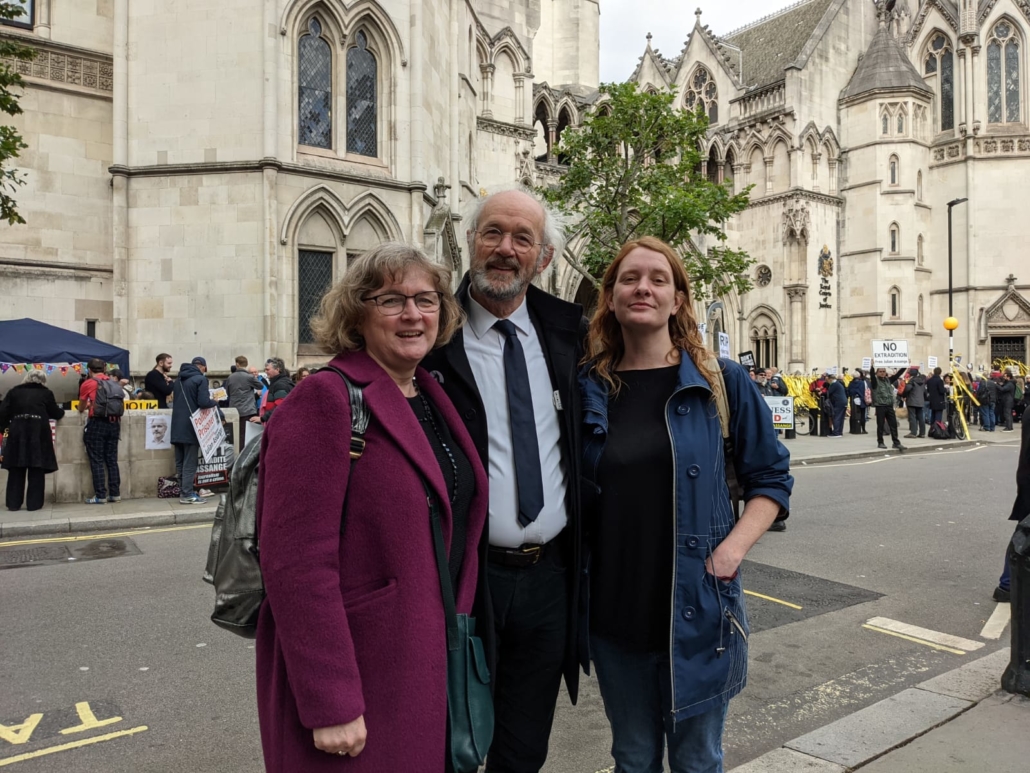 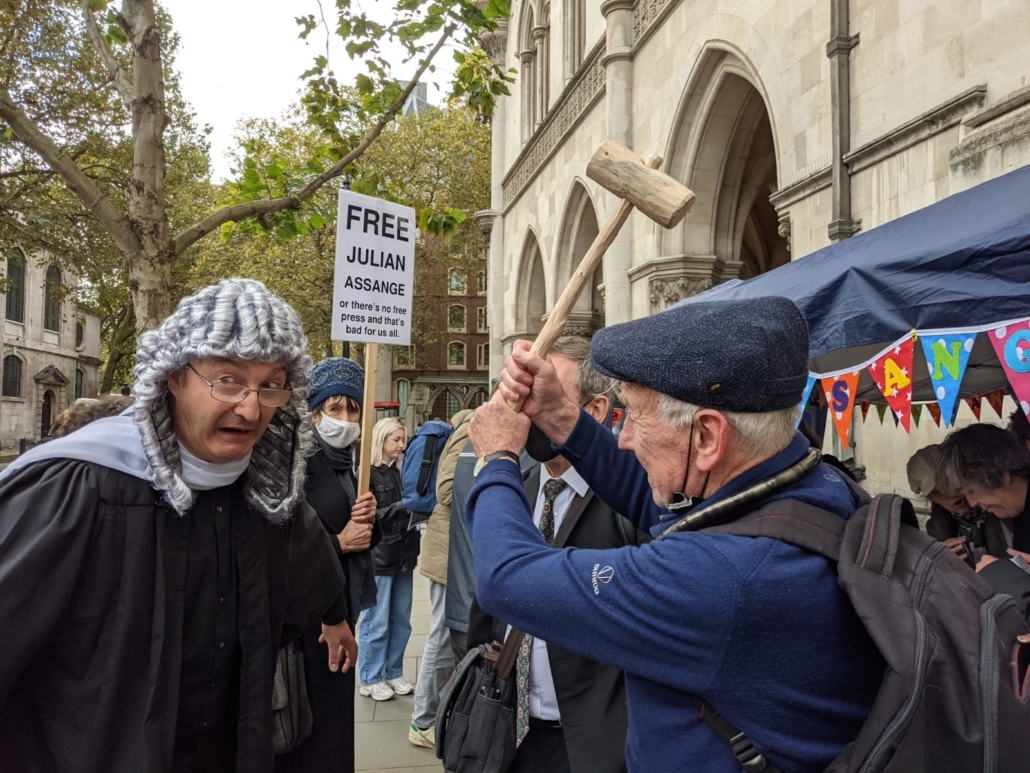 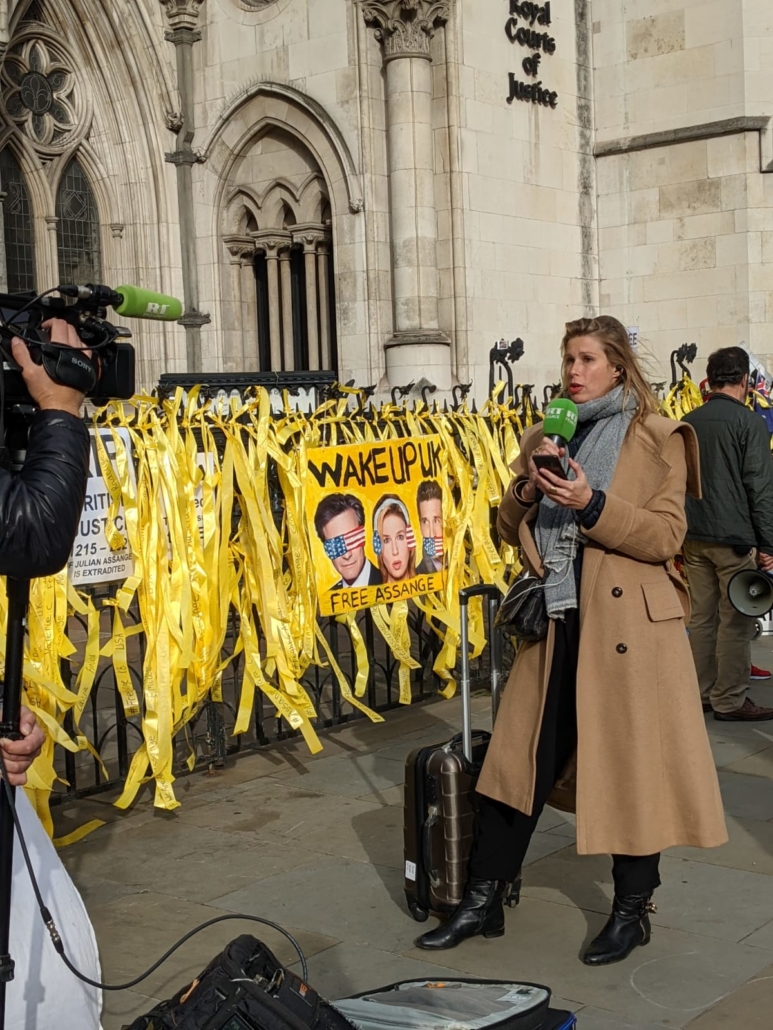 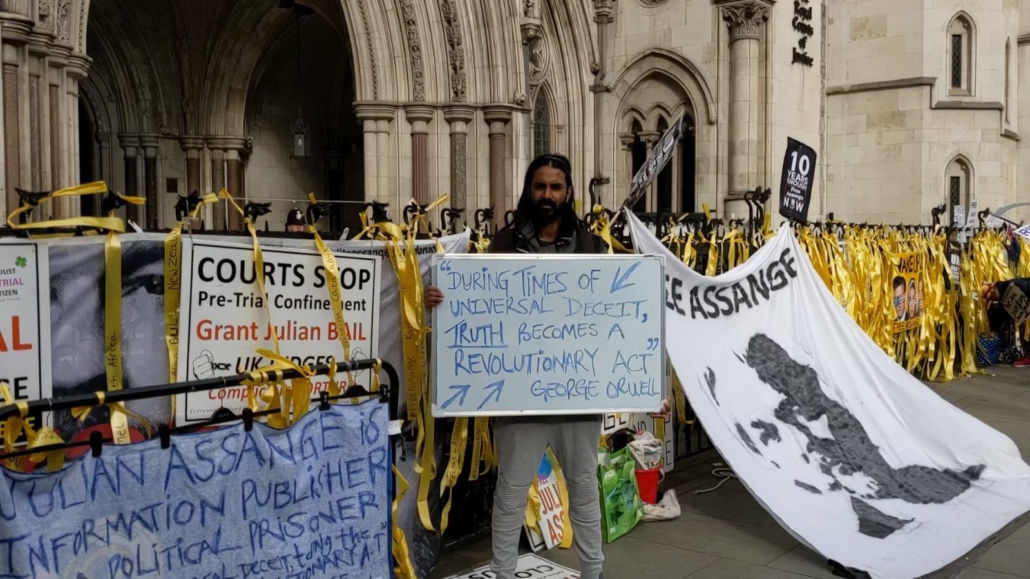 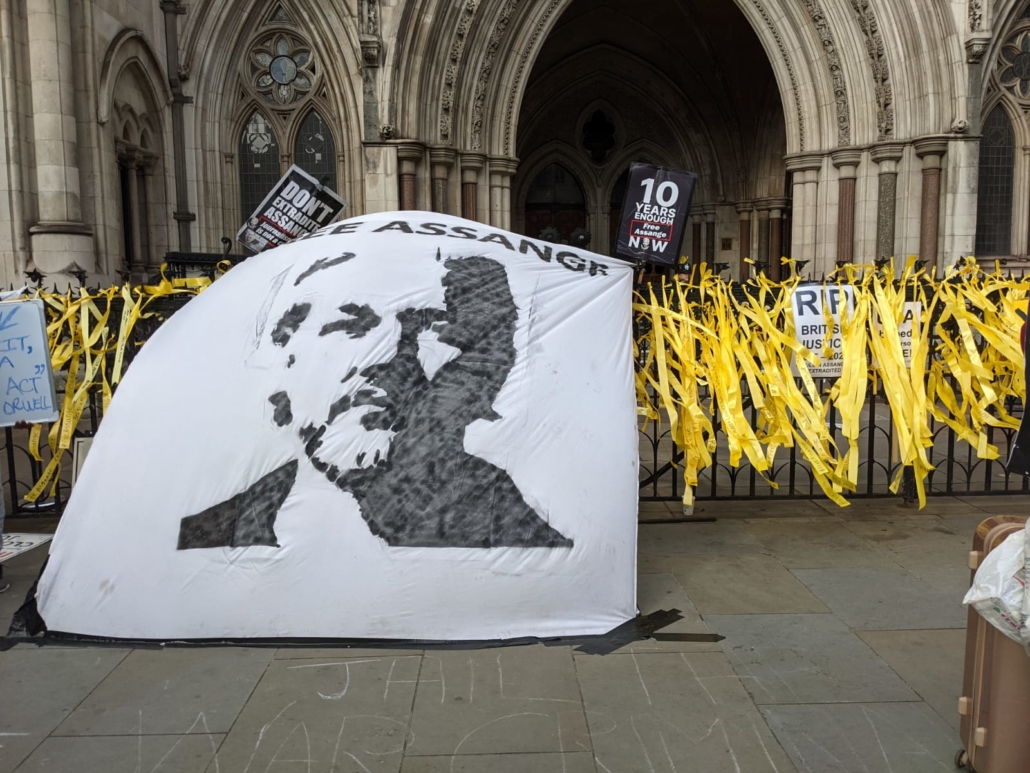 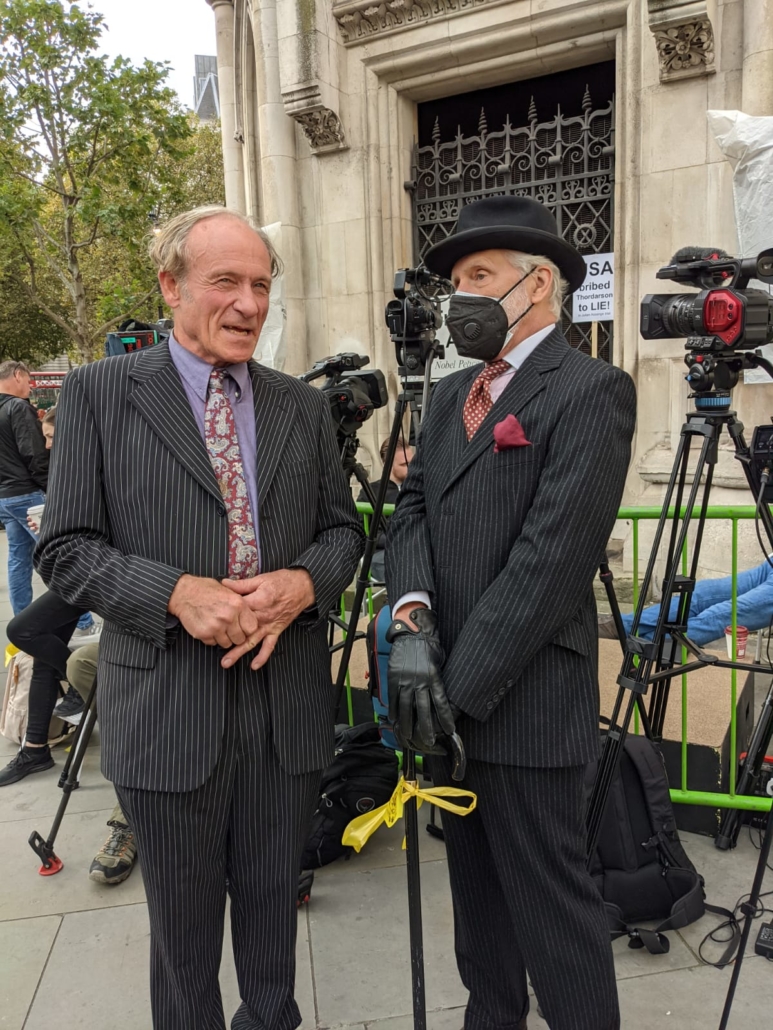 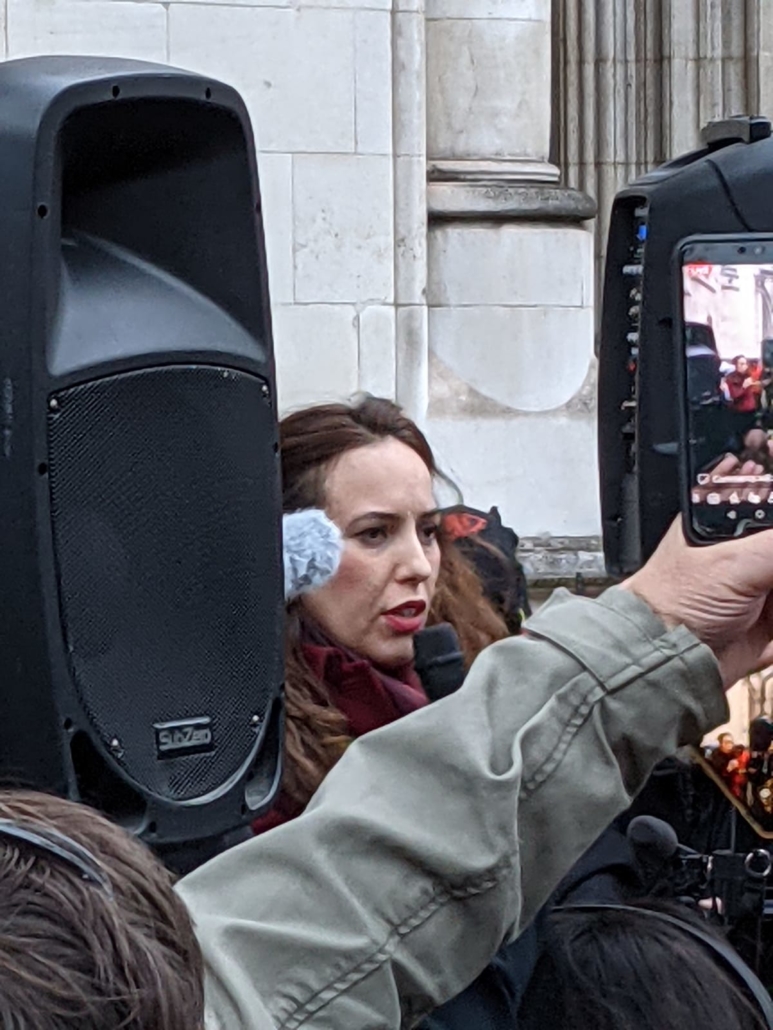 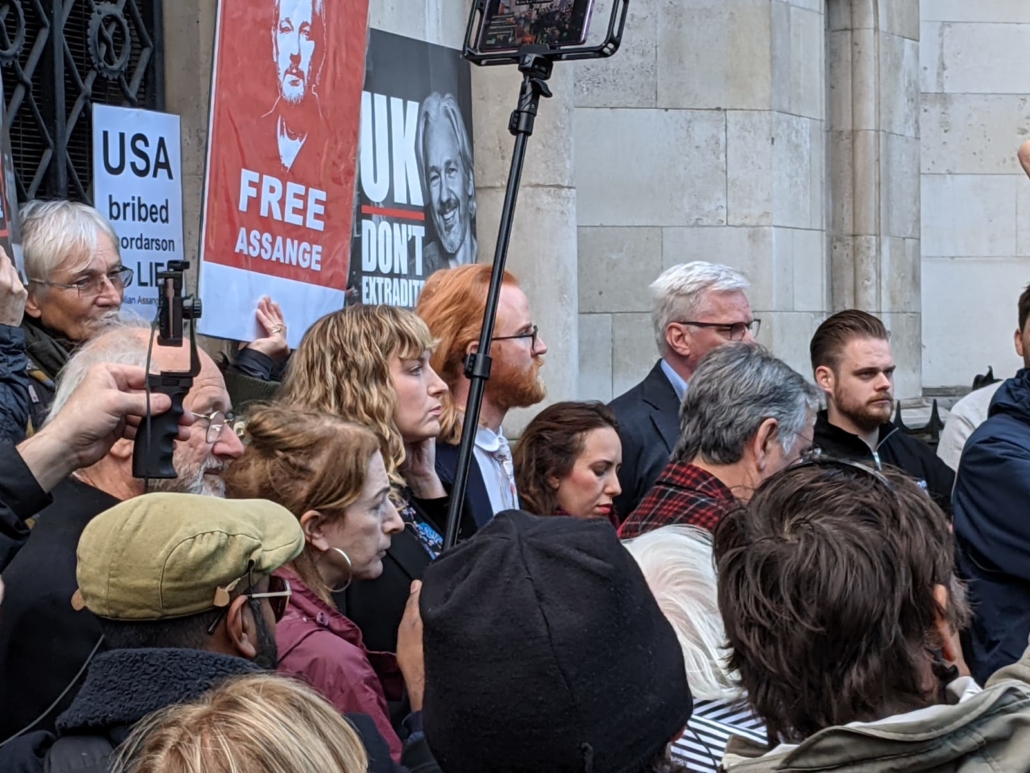 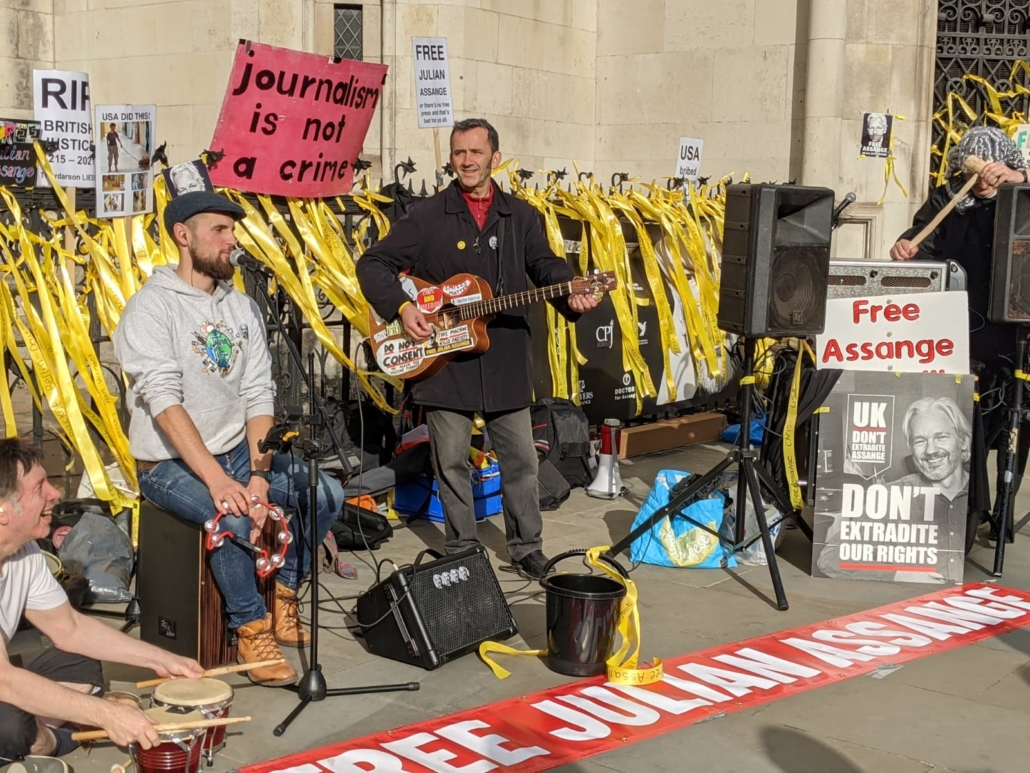 Lack of fairness and transparency in the indictment against Adana Bar Asso...