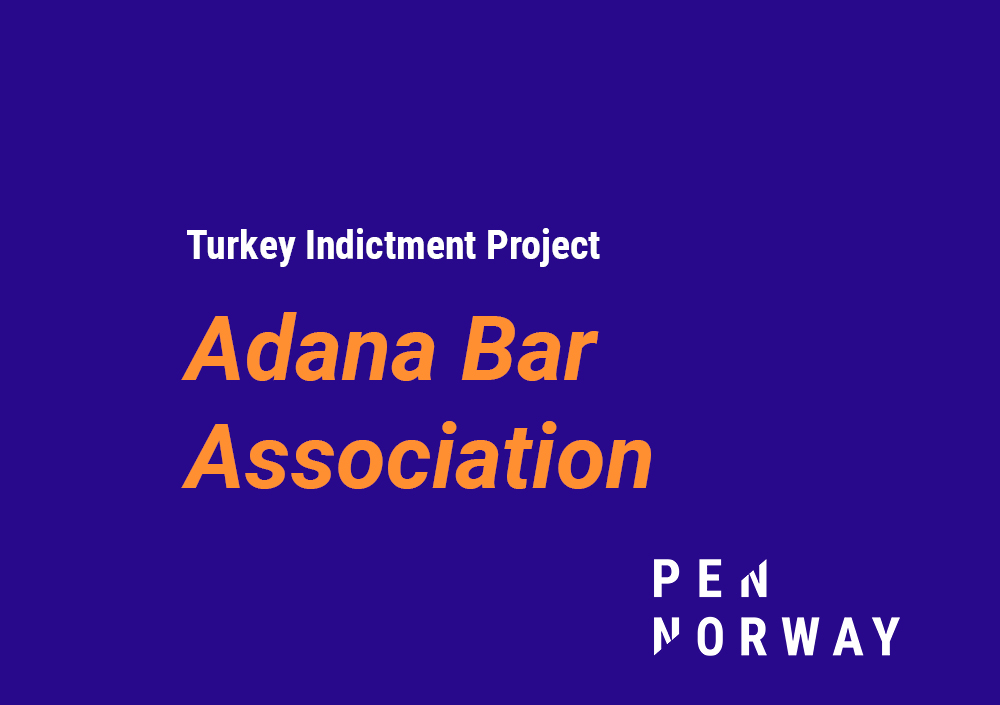 «Serious concern for the guarantees of fairness»

“The flaws in the indictment of the suspects cause serious concern for the guarantees of fairness and transparency of judicial proceedings in Turkey, as protected by the European Convention on Human Rights. We therefore urge the Turkish Ministry of Justice to take our recommendations into consideration, by training public prosecutors about the conditions set out in Article 170 TCPC,” said Stella Pizatto and Jaantje Kramer, who reviewed the indictment.

The indictment targets seven suspects. The suspects are lawyers and are all registered with the Adana BA. Most of these lawyers are well-known as a result of their prominent human rights work and are members of the Progressive Lawyers Association (ÇHD). The suspects are: Ali Akıncı, Sebahattin Demir, Sevil Aracı Bek, Şiar Rişvanoğlu, Tugay Bek, Ümit Büyükdağ and Veli Küçük (the former president of the Adana BA). The lawyers were indicted for “acting in a contrary way to the Governorship’s measures”.i The background of the case is as follows.

In November 2016, three lawyersii that represent the Cumhuriyet Newspaper were arrested together with the journalists from the Cumhuriyet newspaper.iii In April 2017, several lawyers launched an action against the unlawful arrest of their colleagues. This initiative is called “Justice Watch”. Between April 2017 and December 2018, Justice Watch was held weekly without any interruptions. Justice Watch ended in its 85th week with the slogan “Justice Watch is coming to an end, the struggle for justice will continue”. Every week, a local BA became the host of the Justice Watch. In May 2019, Justice Watch was re-launched, because the lawyers and the journalists were rearrested after they had been released.

On 18 May 2017, the seventh Justice Watch was organised all over Turkey to support the imprisoned lawyers that were defending the journalists from the Cumhuriyet newspaper. In Adana, the Justice Watch was organised by the Adana BA, the Progressive Lawyers Association and other legal groups. The action included a sit-in and a press release that was read out loud, to support and ask for the release of the imprisoned lawyers.

The Adana police officers told the participants of the Justice Watch that they were committing a crime, as organising and reading a press release out loud was prohibited. The police informed the lawyers that they would initiate a criminal investigation against every individual who joined the Justice Watch. The lawyers that organised and joined the Justice Watch underlined that fundamental rights should not be interfered with by arbitrary practices and that the public needs to be informed. The lawyers read the press release publicly and sat in front of the courthouse to protest against the attacks on lawyers by the administrative powers. The police officers recorded the demonstration. On 13 June 2017, the police provided an investigative report with respect to every lawyer that had joined the Justice Watch. The report concluded that the lawyers acted against the order of the Governor. Following this report, the prosecution office initiated a criminal investigation against twelve lawyers.

According to Article 32 of the Law of Misdemeanour, violation of an order given by the competent authorities due to judicial proceedings or for the purpose of protecting public security, public order or general health, is treated as a misdemeanour. According to this regulation, the suspect is offered to make a prepayment and if the suspect accepted to pay, the prosecutor makes a non-prosecution decision. If the suspect accepts to pay the required amount of money within a set time period, the prosecution office has to close the investigation and must issue a decision of non-prosecution. If the suspect declines to fulfil the payment, an indictment will be issued.

Of the twelve suspects, six of them paid the penalty (of less than 1000-Turkish Lira), including the former president of the Adana BA (Veli Küçük). However, the prosecutor made a mistake and issued an indictment against the president of the Bar nevertheless. The other six lawyers decided not to pay the prepayment amount and claimed that the prepayment decision was unlawful. An indictment was issued against them as well.

On 5 April 2018, the indictment against the seven lawyers was submitted to the court. The indictment was accepted by the Adana Second Criminal Court of First Instance. The accusation in the indictment was “acting in a contrary way to the Governorship’s measures” (the first sentence of the Article 25/b.1 SoE) and included the possibility to impose heavier sanctions for committing the crime deliberately (Article 53 TPC).iv

On 15 January 2019, a hearing on the merits of the case was held. In their defence, the lawyers admitted that they had participated in the demonstration, but underlined that their actions did not qualify as a crime referring to their right to demonstrate. In their view, their actions were fully legal. Later on, in the third hearing, the Court of First Instance ruled that the demonstration fell under the protection of the right to free speech and that the defendants did not have any intent to commit a crime. The Court of First Instance issued the acquittal of six lawyers and dismissed the case against the president of the Adana BA, who had already paid the penalty.

The lawyers appealed the decision because they wanted to challenge its justification. Even though the Court of First Instance had acquitted them, in the justification for its decision, the Court only focused on the lack of intent as a reason for the acquittal. The decision could be interpreted as if a crime was committed without intent, though the lawyers were of the opinion that no crime was committed at all. In the appeal, the lawyers underlined that the justification of the acquittal should reflect this point. The Adana Regional Court of Appeal examined the casefile and accepted the lawyers’ application. The Court of Appeal stated that the part of the verdict justifying the acquittal by the lack of intent should be removed and that the following sentence should be included instead: “[s]ince the legal elements of the crime charged against the accused are not formed”. The acquittal of the lawyers was therefore final (after the judgment of the Regional Court of Appeal) on 7 December 2020.

A risk of suicide or not? The court’s decision will define Julian Assange’s...
Scroll to top