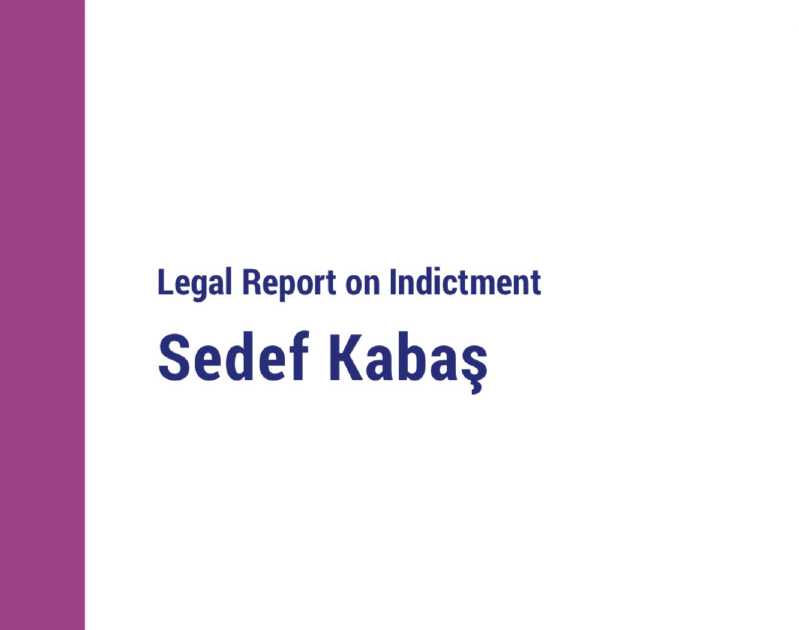 These reports make up a new analysis of indictments that directly concern freedom of expression in Turkey and particularly target journalists.

The report published today analyses the indictment against journalist and broadcaster Sedef Kabaş.

Kabaş is an experienced journalist from Turkey. During her career, she was tried several times because of her journalism. In 2019 she was sentenced to 11 months 20 days in prison for insulting the President Erdoğan. This sentence was suspended.

On 14th January 2022, during a Tele 1 broadcast, Kabaş made some critical comments about Erdoğan and some Ministers of his government and, she quoted a popular proverb that goes “when cattle enter a palace, they do not become king but rather, the palace becomes a stable”.

Criticism began to pour in immediately, including from the Minister of Justice, and she was accused of having “crossed the line” and having “incited hatred”, receiving a warning that she “would be held accountable for this in court”.

A few days later, again within the context of a more articulated discourse, on her social media account Kabaş clarified that the quoted sentence was an ancient Circassian proverb that sounded like “when an ox enters a palace, it does not become king but rather, the palace becomes a stable”, and that she had replaced the word “ox” with “cattle” out of consideration and kindness.

After these incidents, her residence was raided by police. She was arrested on charges of having insulted the President and transfered to Bakırköy Prison.

Her trial was held on 11th March 2022 and Kabaş was sentenced to 2 years and 4 months in prison, although she was later released following 49 days in prison. Her case is still before the Istanbul Regional Court of Appeal.

Lawyer Ezio Menzione evaluated the indictment against Kabaş in the light of Turkey’s domestic law and international law. Menzione underlines that criminal cases of insulting the President have been soaring since 2016-2017 onward in Turkey. Menzione points out the difference between inserting the Kabaş case within the context of a few cases per year instead of thousands and thousands of cases. Menzione points out that such an assessment of the fact cannot but take into account an assessment of the pretextual and illegitimate existence of thousands of similar cases, prosecuted with the sole purpose of silencing political opposition in violation of Article 10 ECHR and Articles 25 and 26 of Turkey’s Constitution.

Due to the ongoing crisis in the judiciary and deteriorated state of the rule of law in Türkiye we will continue to analyse indictments that directly concern freedom of expression in 2023.