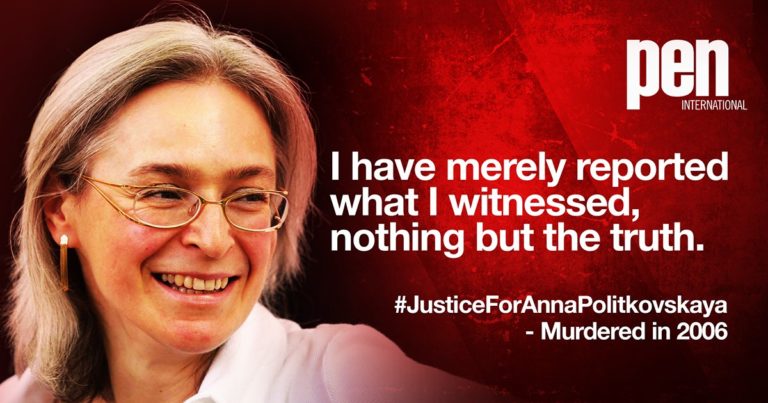 2016: International Day to End Impunity for Crimes Against Journalists

In solidarity with PEN International and PEN Centers around the world, Norwegian PEN observes November 2nd as the International Day to End Impunity for Crimes Against Journalists.  On this day we commemorate journalists who have been killed in their search for truth and transparency, and for reporting news to the public in an attempt to hold both governmental and non-governmental actors honest and accountable.  As PEN International reports, 80 cases of impunity for crimes against journalists were recorded in 2015, and it is high time to “end to the climate of impunity that allows attacks against journalists to go unpunished”.

In light of this international day of recognition, PEN wishes to highlight the case of Anna Politkovskaya, a prominent Russian investigative journalist and writer, whose work on the Chechen conflict and vociferous criticism of President Putin’s policies in Chechnya ultimately led to her untimely death on 7 October, 2006.

Due to her rigorous reporting for Novaya Gazeta, and her open critiques of Putin’s regime, Politkovskaya was subject to severe harassment from Russian authorities, and in 2004 she was poisoned a flight to North Ossetia, on her way to negotiate the release of hostages in a Beslan school.

On 7 October, 2006, Politkovskaya was the victim of a contract killing; she was found shot in the head in the elevator of her Moscow apartment, and though 5 men were finally convicted of her murder in June 2014, it is widely believed that the true masterminds behind her killing, and those that ordered the attack have not been brought to justice.

Tragically, Politkovskaya’s death is only one of many such stories among journalists.   Similarly, Akhmednabi Akhmednabiev was shot to death in 2015 outside his home in Makhachkala, and now, three years later, no one has been arrested in connection with his murder. In 2009, journalist and human rights defender Natalia Estemirova, a colleague of  Politkovskaya’s, was kidnapped and murdered in Grozny, Chechnya.  Her family is still awaiting justice seven years later.

According to PEN International, “impunity remains a serious concern in Russia, with the Committee to Protect Journalists recording at least 36 cases of murders of journalists in the country since 1992, the majority unresolved”.

Norwegian PEN and the Writers in Prison Committee call on President Putin and the Russian authorities to honour their commitment to free speech and freedom within their media, and to demonstrate this commitment with a renewed investigation into Politkovskaya’s death, with an aim to identify and convict those who are truly responsible for her assassination.

An open letter to President Putin:

To His Excellency
President Vladimir Putin,

On behalf of Norwegian PEN and the Writers in Prison Committee, we call on you and the Russian authorities to honour your domestic and international commitments to freedom of expression, and to ensure the effective protection of this right for journalists, as well as their protection against all forms of violence that result from their work.

We observe November 2nd as the International Day to End Impunity for Crimes Against Journalists, and take this opportunity to remember Anna Politkovskaya, the journalist and writer who was assassinated on 7 October 2006, after taking a critical stance of the Russian government’s policies in Chechnya.

Although we recognize the efforts that have been made thus far in connection with Politkovskaya’s murder, namely the conviction of 5 of her killers in 2014, we do not feel that justice has been served, or that the actors truly responsible for her death have been exposed.

We urge the Russian authorities to demonstrate their commitment to end impunity for crimes against journalists by renewing their investigation into Politkovskaya’s death, and by identifying and convicting the masterminds behind her killing.