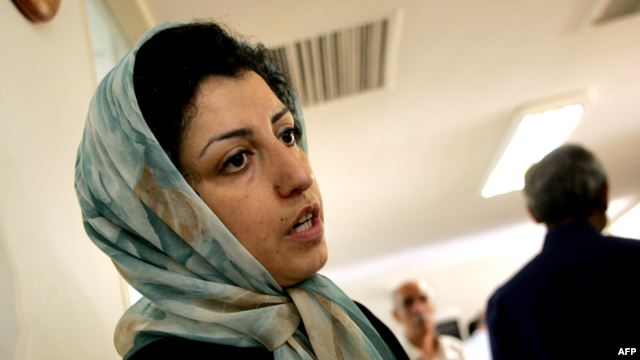 Letter from Narges Mohammadi to the PEN Membership

I’m writing this letter to you from the Evin Prison. I am in a section with 25 other female political prisoners, with different intellectual and political point of view. Until now 23 of us, have been sentenced to a total of 177 years in prison (2 others have not been sentenced yet). We are all charged due to our political and religious tendency and none of us are terrorists.

The reason to write these lines is, to tell you that the pain and suffering in the Evin Prison is beyond tolerance. Opposite other prisons in Iran, there is no access to telephone in Evin Prison.  Except for a weekly visit, we have no contact to the outside. All visits takes place behind double glass and only connected through a phone. We are allowed to have a visit from our family members only once a month.

As a defender of human Right, who has experienced and have had dialogues with many people detained in solitary confinement, I emphasize that this kind of punishment is inhuman and can be considered psychological torture.

As a humble member of this prestigious organization, I urge all of you, as writers and defenders of the principles of free thought and freedom of speech and expression, to combat the use of solitary confinement as torture, with your pen, speech and all other means. Maybe one day we will be able  to close the doors behind us to solitary confinement and no one will be sentenced to prison for criticizing and demanding reforms. I hope that day will come soon.

As an independent journalist, former vice-president and spokesperson of the Defenders of Human Rights Center (DHRC), and activist against the death penalty in Iran, Narges Mohammadi has long suffered from persecution at the hands of the Iranian authorities.

She has been banned from travelling abroad since 2009, and in the following year, Mohammadi was arrested from her home without a warrant and held in connection with her work with the DHRC.

In 2011, a Tehran court convicted Mohammadi of ‘acting against the national security’, ‘membership of the DHRC’ and ‘propaganda against the regime’ for her reporting on human rights violations, and she was sentenced to serve 6 years in prison (reduced from her original cumulative sentence of 11 years).  More recently, in May 2015 Mohammadi was arrested days after a fresh trial began on charges including “spreading propaganda against the system,” “gathering and colluding to commit crimes against national security” and “membership of an illegal organisation whose aim is to harm national security (Step by Step to Stop the Death Penalty).

Mohammadi is the mother of nine-year-old twins, and the wife of prominent journalist and activist Taghi Rahmani, who has spent a total of 17 years in prison.  They are both honorary members of Danish PEN.

After already having served 6 years, as of May, Mohammadi has now been sentenced to an additional 16 years imprisonment (of which she will serve at least 10 years, if the court’s decision is upheld).  Not only is Mohammadi a prisoner of conscience, but she also faces grave health concerns that are not being properly treated or recognized by Iranian authorities.    According to PEN International:

«Serious concerns for Mohammadi’s health persist following reports that she suffered several seizures in August and October 2015. According to reports, Mohammadi was taken to hospital on each occasion and on at least one instance she was returned to prison against medical advice. In a subsequent incident she was handcuffed to the bed for the first few days of her hospital stay.»

Through the Rapid Action Network, Norwegian PEN and the Writers in Prison Committee have appealed to the Iranian authorities for the immediate and unconditional release of Mohammadi.  Click here to read our letter.

In a May article, The Guardian commented on the international community’s reaction to Mohammadi’s imprisonment, and more specifically the High Commissioner for Human Rights’ condemnation of her 16-year sentence. To read the article, click here.