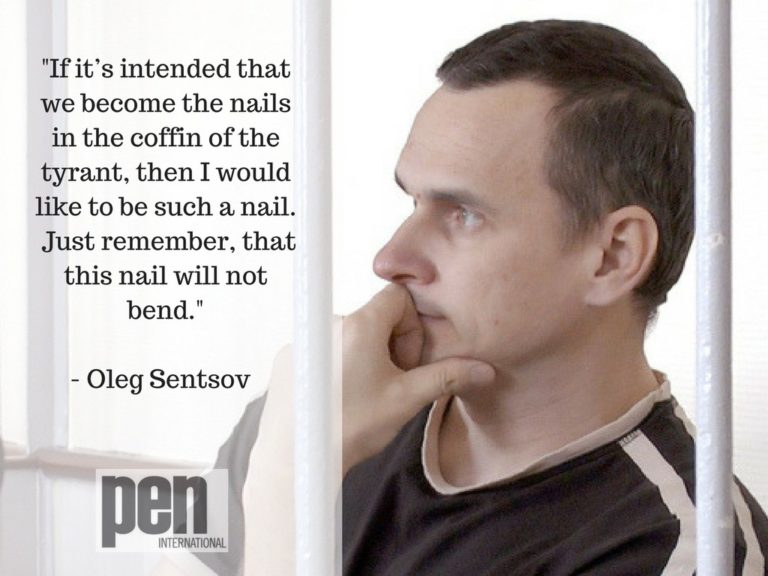 10 May marked three years since prominent Ukrainian writer and filmmaker Oleg Sentsov was arrested and sentenced to 20 years in prison on terrorism charges after an unfair trial by a Russian military court, marred by allegations of torture.

PEN International and The Norwegian Writers in Prison Committee hereby urge you to immediately free writer and filmmaker Oleg Sentsov from prison.

Sentsov was arrested on the grounds of “suspicion of plotting terrorist attacks” and sentenced to 20 years in prison during an unfair trial by Russian military court with serious flaws in the judicial proceedings. The key witness retracted his statement, saying it had been extracted under torture. Sentsov was still convicted and is currently being held in Russia, despite him being a Ukrainian citizen.

These unfair proceedings give reason to believe Sentsov was arrested and tried because of his opposition to Russia’s annexation of Crimea. We therefore urge you to immediately release him from prison. If there are grounds to prosecute him on these charges, this should be done by a civil court under Ukrainian law.

Oleg Sentsov has claimed he was tortured and mistreated in the time following his arrest on May 10th 2014. We therefore also urge for the Russian authorities to order an independent and impartial investigation into Sentsov’s allegations of torture and other ill-treatment.