The situation for freedom of expression and opinion in Egypt has deteriorated sharply since the arrival of President al-Sisi into power in 2014. Many journalists and writers have been arrested or forced to flee the country. One of them, Ibrahim al-Husseini, 63 years old, is a writer and activist. He is the author of short stories including his latest collection entitled Leil which is published by the Supreme Council for Culture in Egypt. In his articles, al-Husseini criticized both dictatorships and religious extremism in Egypt. Al-Husseini has been defending social justice since the 1970s. Due to his peaceful activities and critical writing, he was previously subjected to arrests and detentions. He was again arrested in the early morning of 9 December 2018. On 23 December 2018, the State Security Prosecution ordered al-Husseini’s pre-trial detention for 15 days on a charge of “inciting a demonstration”. Al-Husseini’s pre-trial detention has been renewed on 5 January 2019 for another 15 days. PEN believes that the charge against al-Husseini is politically motivated, and calls for his immediate and unconditional release, and for him to be provided with adequate medical care. We also call on the Egyptian authorities to free all those held solely for exercising their right to freedom of expression and association. 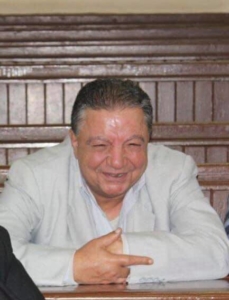 PEN International and The Norwegian Writers in Prison Committee hereby urge you to unconditionally release Ibrahim al-Husseini from prison and drop all charges against him.

Al-Husseini was arrested at his home in Cairo in December 2018 and we have reason to believe this was due to social media posts he wrote about events in Egypt and France. Al-Husseini suffers from several serious health problems, which require regular medical care.

We are very concerned with his situation and his health and hope you will ensure that he is properly taken care of, pending his release, and additionally that he gets full access to family visits and legal representation.

PEN International and The Norwegian Writers in Prison Committee urge you to remember that al-Husseini was merely executing his right to freedom of expression. This right should be respected and is in accordance with the Egyptian Constitution and Article 19 of the International Covenant on Civil and Political Rights, to which Egypt is a state party.

We urge you to immediately and unconditionally release Ibrahim al-Husseini and drop all charges against him, and to free anyone else held solely for exercising their right to freedom of expression and association.

COPY:
The Norwegian Ministry of Foreign Affairs
The Egyptian Embassy in Norway