‘No matter what the price or consequence might be, we will never compromise from the magical creations of writing and of the written word. We would like to repeat once again our gratitude to PEN members, who have stood by us on this path.’ Nedim Türfent

A news editor and reporter at the pro-Kurdish Dicle News Agency (DİHA), Nedim Türfent was arrested on 12 May 2016 after covering clashes between the Turkish army and the armed Kurdistan Workers’ Party (PKK) in the predominantly Kurdish southeast of Turkey. Nedim Türfent spent nearly two years in solidarity confinement, during which time he was transferred to several prisons. In a letter addressed to Turkish columnists and dated 8 May 2017, he reported harrowing detention conditions in his four-meter-long prison cell, where he was denied access to TV, radio, books or newspapers and forced to read ‘the back of detergent boxes’ to pass time. He was formally charged with ‘membership of a terrorist organisation’ and ‘spreading terrorist propaganda’ 10 months after his arrest. Despite clear evidence of flagrant fair trial violations, Nedim Türfent was sentenced to eight years and nine months in prison for ‘membership of a terrorist organisation’ and ‘spreading terrorist propaganda’ on 15 December 2017. While waiting for a ruling on his case, Nedim Türfent spends his time studying Turkish, English and German and writing poetry.

In an open letter to the Turkish Minister of Justice Abdulhamit Gül, Norwegian PEN’s Writers in Prison Committee urges the Turkish authorities to release Nedim Türfent immediately and unconditionally. 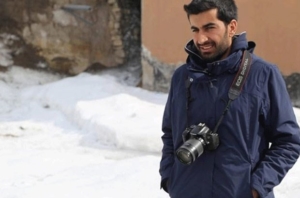 I am writing to you on behalf of Norwegian PENs Committee for Writers in Prison.

On the 15th of December 2018 it was one year since news editor and reporter, Nedim Türfent, was sentenced to eight years and nine months in prison on trumped-up terrorism charges following an unfair trial, during which scores of witnesses said they had been tortured into testifying against him. Prior to his arrest in 2016, Nedim Türfent was covering Turkish military operations in southeast Turkey. He spent almost two years in solidarity confinement in harrowing detention conditions. His sentence was upheld on the 19th of June 2018 and his lawyers have lodged an appeal before the Constitutional Court. Determined to keep writing, Nedim Türfent started composing poetry while detained.

Norwegian PEN believes that Nedim Türfent is being imprisoned solely for the peaceful exercise of his right to freedom of expression and calls for his immediate and unconditional release.

We are also calling on the Turkish authorities to end the prosecution and detention of journalists simply on the basis of the content of their writing or alleged affiliations, and to immediately release all those held in prison for exercising their rights to freedom of opinion and expression.

COPY:
The Norwegian Ministry of Foreign Affairs
The Turkish Embassy in Oslo

24 January: The persecuted – and the situation in Turkey