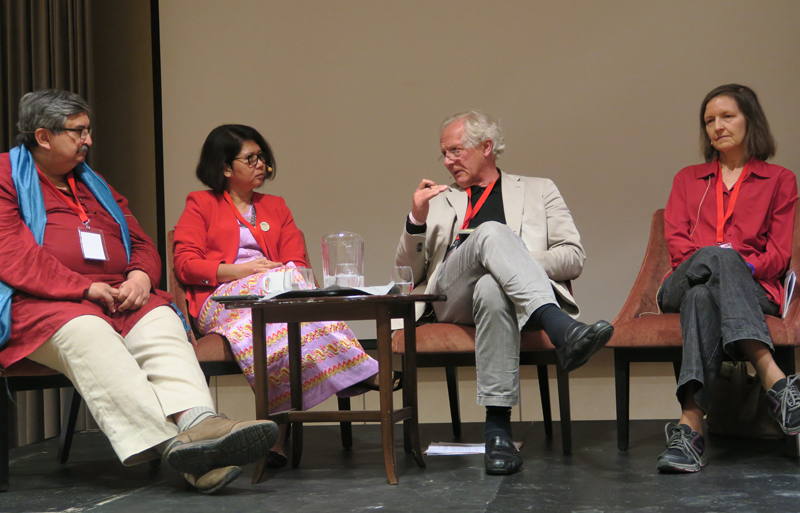 What happens when falsehood and distortions are expressed in the name of free speech? Should there be restraints? How can lies be countered in the post-truth world? And is it possible to define ‘truth’ and ‘falsehood’ in a world where alternative facts are as accessible as official histories?

William Nygaard, President of Norwegian PEN, speaks about the situation in Norway at the ICORN Network Meeting & PEN International Writers in Prison conference on 1 June 2017.

Fake news have existed since the very first newspaper saw the light of day in Germany in the fifteenth century. What characterizes our era, however, is that this phenomenon has become a widely used political tool, used on the one hand to denounce journalistic content one disagrees with, and on the other to attack the free and independent media. Fake news and trolling are evils that should always be attacked, wherever they pop up. Working against the attitudes underlying this particular kind of abuse is a prerequisite for the survival of a free democratic society.  In Norway the existence of fake news is on the increase – as is the case in other countries – and as I will illustrate further in a little while, the debate on how to deal with it is already well under way.

When considering basic principles concerning this phenomenon, one paradox arises: Attempts to define, regulate and penalize what is seen as «fake news» could lead to violations of the right to freedom of expression. It could well be that tolerating false news stories, rumors and even outright lies are the price we pay for the fundamental right to free communication in an open society. To solve this dilemma requires a demanding, but necessary, balancing act. This point was recently discussed in a joint declaration by prominent international organizations monitoring freedom of the press, among them David Kaye, the UN Special Rapporteur on Freedom of Opinion and Expression, and his colleagues.

In my view, the essential condition for a defense of freedom of expression is a human rights based approach, fighting propaganda, disinformation and fake news. This also implies that we should refrain from introducing provisions on fake news which violate human rights standards.

According to a 2017 survey on freedom of the press from Journalists without Borders Norway takes the lead. But as we know, freedom of the press and freedom of expression are not synonymous entities. Who is responsible for securing these fundamental rights in an open society like ours? Another survey on fake news, provided by the Ministry of Culture, reveals a characteristic feature in our solidly social-democrat society: Responsibility for the fight against trolling and fake news should not reside with the individual citizen, but rather with relevant institutions in our society. 68 % of the respondents felt that responsibility lay with the media, while only 27 % considered that the population has a substantial responsibility for preventing the spreading of fake news.

To me it seems clear that media responsibility alone is not sufficient.  In the pluralist media universe of the future, traditional media organizations are gradually losing their dominant position and are being replaced by an infinite variety of other platforms. In this situation it is our individual sense of responsibility and critical sense, together with an increased focus on education that is needed as a bulwark against the tsunami of fake news and other forms of trolling.

This individual responsibility becomes even more important when we look at the development of Facebook. Today Facebook is the platform (together with other social media) that is lining up for a takeover of the greater part of news distribution in the future. We really hate it, all kinds of monopolies tendencies we dislike. The survey from the Ministry of Culture shows that Facebook, as a medium without an overall editorial policy, also is the medium spreading the largest quantity of fake news and trolling. We know that Facebook takes this challenge seriously and is working hard on establishing further active measures to improve their control over this phenomenon. This is a positive development, but we still have a long road ahead of us.

Media competitors to join forces in the war against fake news
In July four important Norwegian media institutions: VG, Dagbladet, TV2 and NRK (the National Broadcasting Corporation) together with two independent foundations, Tinius-stiftelsen and Fritt Ord, will launch a new initiative in order to limit the amount of fake news and trolling in our media universe. The initiative is called Faktisk (Factual). It is a shareholding company, where the owners contribute 10 million kroner the first year and follow up with a guaranty (2 mill) the year after.

This is the first time competitors in the media are trying direct editorial collaboration apart from the editorial rationalizations that followed the important media mergers of the last decade. This is sensitive territory. This new initiative needs to be discussed from an analytical, critical angle, weighing the pros and cons,  based on the absolute premise of freedom of expression.

What kind of truth is a common editorial set-up supposed to legitimize, on what premise will it collect and sort the information, and judge between true and false info? Will the project secure mechanisms strong enough to avoid abuse, misleading information or various forms of conflict, for instance of editorial character?  Considering PEN’s role as a guardian of freedom of expression I feel obliged to point out the danger of establishing a kind of «truth police». At the end of the day, who is the guardian of truth? What will be made public, and how can we assure that it meets the real need in the public, and provide the responses they look for?

To be honest, it seems that this project – with all its merits and good intentions – needs to further clarify a definite goal and structure. The most important is to avoid reinforcing stereotypes and a relaxation among media professionals who mistakenly believe that this project will diminish their own ethical responsibility for the stories they present.

It is difficult to evaluate the quality of the Norwegian media on an international scale. But there can be no doubt that the generous economic framework of government media policy has been important, the way a long term cultural policy has contributed to the international success of Norwegian literature. And to a person with my professional background it seems that the Norwegian media in general maintains a respectable international level in their criticism of sources and continuous internal debate – at least until new economic realities will force changes in yet more editorial offices. In my active years in the media and in publishing I have witnessed how the motivation and the will to verify facts have improved considerably. Increased ethical awareness and the examples of people committed to good journalism have been important.

On the other hand, we must warn against a type of surveillance of fake news – and other news – that engenders new authoritarian ways of thinking and acting. Norwegian PEN visited Edward Snowden in Moscow recently, and his unreal universe is a powerful reminder. So far he has become a victim of his own idealist search for truth. Snowden’s warning of illegal surveillance of us all is being punished, while the guilty party walks free. That is the truth, and no «alternative fact» can change that.

The Role of PEN and Norwegian PEN
The response of Norwegian PEN in the critical situation for freedom of expression we are faced with has been to strengthen our focus on our own country. This does not mean that we have abandoned our efforts internationally – very far from it! But the same principle holds good in our work as in the struggle for climate change: If you are not willing to do something about your own situation, you can hardly expect an improvement in the overall community. Three years ago Norwegian PEN started The Norwegian Project for Freedom of Expression and Responsibility, supported financially by three separate foundations. Our organization is small, with two employees, but with a hard-working board, executive committee and highly committed members. Over the last few years membership has doubled and now counts close to 900, a solid contingent among the more than 100 member countries of PEN International.

Our project focuses on eight separate challenges to freedom of expression in this country, among them of course the media development, whistle-blowers, surveillance, challenges in a multicultural society, and not least: an active approach to young people on the meaning and impact of freedom of expression. On each project we make use of the most qualified experts, always in close cooperation with our strongly motivated board. This approach generates new energy, and we believe that Norwegian PEN signals a credible commitment to making an effort also in a larger format, internationally.

In other words: we try to handle both fake facts and the trolls that create them, and hopefully they will burst at sunrise, as they do in the fairy tales.