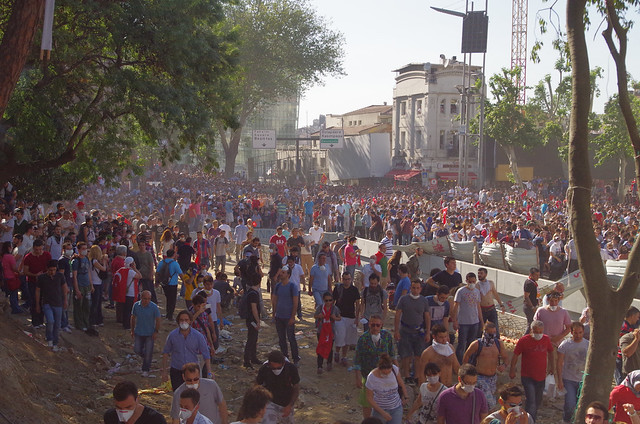 We, the undersigned freedom of expression and media freedom organisations, strongly condemn the court’s interim decision on the Gezi Park trial to continue the detention of civil society leading figure Osman Kavala at the end of the third hearing of the case, on 8 October 2019.

The judicial panel of the 30th High Criminal Court sitting at Silivri High Security Facility in Istanbul upheld the prosecutor’s request for the continuing detention of Kavala in Silivri. The next hearing was set for 24-25 December 2019. We believe that the decision against Kavala’s release and the very continuation of this trial contravenes international human rights standards and is a clear demonstration of the lack of a functioning judicial system in Turkey.

We call for the case against all 16 defendants to be dropped and for Kavala and human rights defender Yiğit Aksakoğlu to be compensated for the time they have spent in prison.

Doubts over the independence of the court panel were cast by many, including lawyer Can Atalay, defendant in this case. While giving oral evidence at court in his defence, Atalay commented that the changes in the judicial panel made by the Council of Judges and Prosecutors are indications of the lack of impartiality of the judiciary. As such, he argued that it was in contravention of Articles 36 (right to a Fair Trial) and 37 (right to a Natural Judge) of the Turkish Constitution, and in violation of the right to a fair trial as enshrined in Article 6 of the European Convention on Human Rights.

The lack of independence of the judicial panel has been proved beyond doubt today. In a case where there is neither evidence nor cause to detain the defendant Kavala in prison for one more day, the decision was given for his continued detention. By the time of the next hearing in December, Kavala will have spent over two years in prison for no tangible legal reason. We call for the entire case to be dropped and for this surreal and illegal process to be brought to a close.

A decision on Kavala’s case remains pending before the European Court of Human Rights. Today’s proceedings underscore the disintegration of the rule of law and domestic remedy in Turkey, as the defendant – who has already spent over 700 days in detention – is ordered to remain in pre-trial detention– on completely baseless charges. We urge the European Court of Human Rights to speedily rule in this case.

We urge the Turkish Ministry of Justice to put an end to such practices where punishment is meted out ahead of possible conviction and to commit to the abolition of extended pretrial detention, as the Government outlined in the recent Judicial Reform Strategy, by immediately freeing Kavala.

We also call upon all diplomatic missions and all other international observers to attend the next hearing on 24-25 December 2019 to records the proceedings and show their continuing support for the defendants.