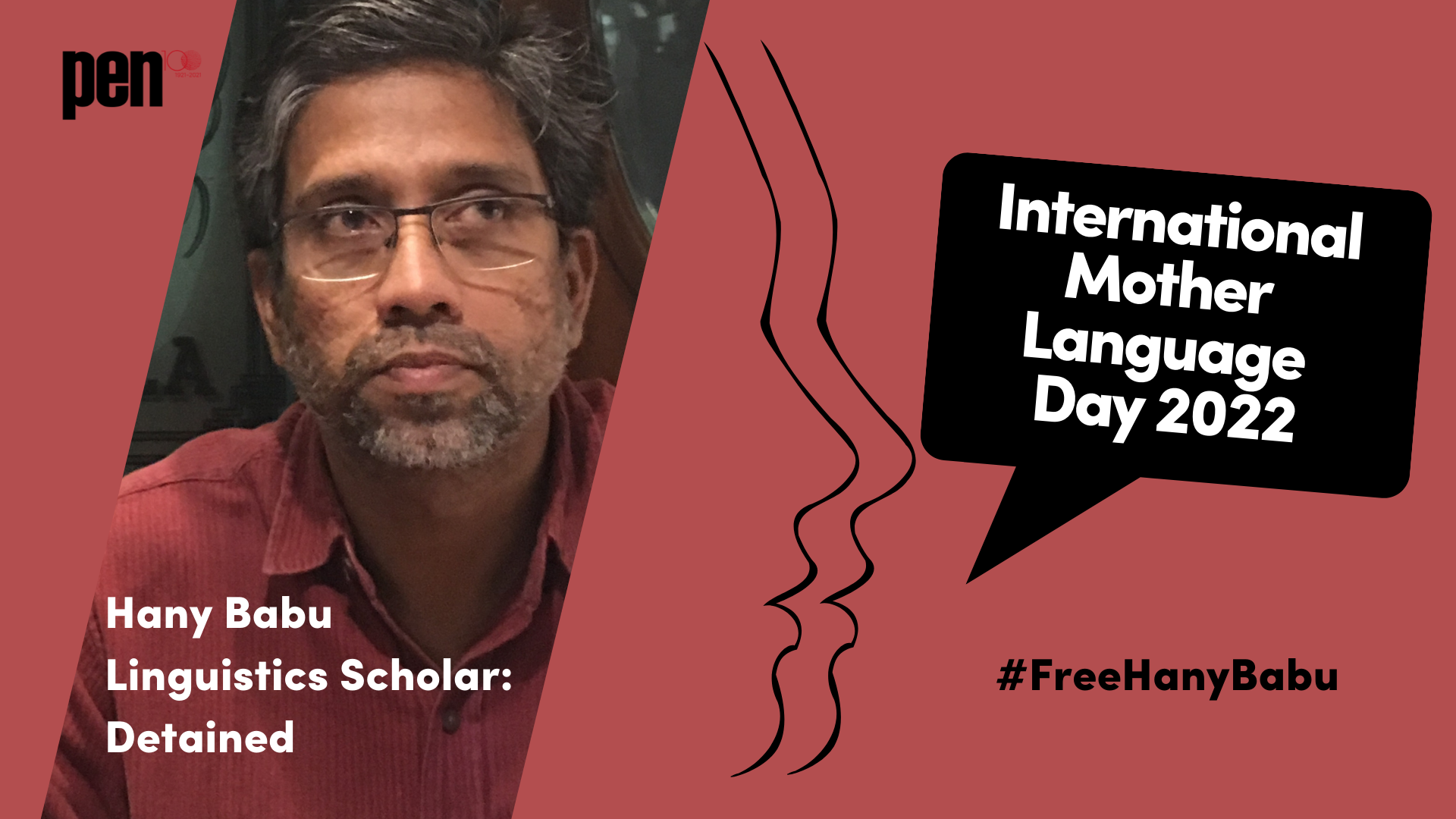 On 21 February 2022, the International Mother Language Day, PEN Norway join PEN International in commemorating and celebrating the importance of linguistic diversity around world.

This year, we call for the release of linguistics scholar and activist Hany Babu (India), who has been unjustly detained by the Indian authorities as part of the government’s wider crackdown on dissidents and advocates for the rights of marginalised communities in India.

Hany Babu is an associate professor of language and linguistics at Delhi University and a committed anti-caste activist and advocate for greater protections of marginalised languages, who has regularly used his writing to highlight the relationship between human rights and linguistic plurality.

Babu is one of 16 writers, scholars and activists, including Varavara Rao, who have been detained by the Indian government under India’s counterterrorism law, the Unlawful Activities (Prevention) Act (UAPA). The charges against the group, referred to as the BK-16, reportedly arose from evidence of their ‘involvement in inciting violence’ at a public event held on 31 December 2017 by activists advocating for the rights of Dalits and other marginalised communities. On 1 January 2018, one day after the event, riots erupted between Dalits and Hindu nationalists during a celebratory gathering to mark the 200th anniversary of the Battle of Bhima Koregaon, a significant cultural event among India’s Dalit community.

Several United Nations Special Rapporteurs have expressed their concern over the case, and over 50 public intellectuals, including Noam Chomsky and Nobel laureates Olga Tokarczuk and Wole Soyinka, have signed an open letter calling for their release. Following Hany Babu’s initial detention, hundreds of students wrote letters of support, providing numerous moving accounts of his egalitarian approach to education and commitment to linguistic diversity.

On 10 September 2019, Babu’s home was raided by police who proceeded to seize his laptop, mobile phone and two books on caste and social formations without a search warrant. He was subsequently arrested by the India’s National Investigation Agency (NIA) on 28 July 2020 and sent to India’s notorious Taloja Central Jail where he has since been held in grossly inadequate conditions. In May 2021, Babu was repeatedly denied basic medical treatment after contracting a severe eye infection, eventually resulting in his temporary hospitalisation before he was forced to return to prison.

The appalling conditions that the Bk-16 detainees have been held in have contributed to the death in detention of activist and priest Stan Swamy, and the hospitalisation of poet Varavara Rao, who was later released on temporary medical bail. Several of the BK-16 detainees, including Babu, have contracted COVID-19 while detained in prison.

There have also been numerous procedural failings throughout the BK-16 cases, including accusations of evidence tampering, and more recent reports of the discovery of Pegasus spyware on at least one of the accused’s devices prior to his arrest.

Babu’s detention, alongside the numerous scholars, writers and activists who have been charged under the deeply repressive UAPA, is emblematic of India’s deteriorating freedom of expression environment, which has resulted in growing levels of censorship and the targeting of government critics, journalists and social media platforms.

PEN International considers Hany Babu’s detention and that of his fellow activists a breach of their right to freedom of expression, and calls for their immediate and unconditional release.

This is what you can do:

Write a letter or e-mail to the authorities, expressing your concern and calling for their immediate and unconditional release.

Raise awareness about the case of Hany Babu and his fellow activists, using the hashtag #FreeHanybabu

Please share this graphic on social media together with your messages.