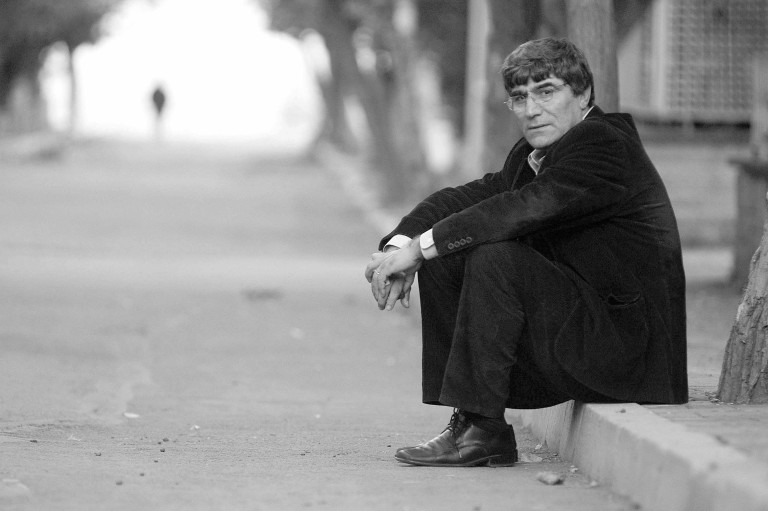 Hrant, as a landmark in history | Ece Temelkuran

There is a history of oblivion, weird as it is. We never forget what we have forgotten. Or what we should be forgetting. There is a history of forgetting as a deed. This is not the linear past of the concept of “oblivion”.  It is more like layer after layer of shame, layer after layer of ignoring the shame, then layers of remembering it, blaming those who remember, wiping off those who remind it from the face of the earth, to make them vanish in the history of oblivion… The History of Oblivion is such a voluminous, convoluted subject.

Hrant Dink, oh Hrant Dink, he stands in this layered history, right at the spot where the circle is completed. Trying to remind us of a scar of 100 years ago, he became a target to become a scar himself buried deep in the history of oblivion. And we are trying not to let this happen.

I sometimes think of us as people who try to prevent the burial of the deceased. How strange… Yet other times we are trying to hold an honourable funeral for our dead, struggling to bury them properly in spite of the vicious king. This is even weirder. Even more Antigone.

Hrant was killed because he was trying to remind us of a history of oddness without shaming us. He was trying to speak without blaming. His was an act of “revolutionary embarrassment”*. Had he shouted aloud, blaming us, finger pointing us out as “murderers”, he wouldn’t have been killed. For our history is one where those who try to mediate are shot. No danger for those who wait on both sides, in trenches of the battleground. Whoever dares to stand in the middle, saying, “Listen for a minute!” is shot in the back of the head. A horrifying signature of murder.

History doesn’t bring to account the deeds that people have done. It is us who do that. If people don’t question, history forgets. Nobody accounts for their deeds in the face of history. If they are asked to do that, it will be the people they will have to face. For that reason, I don’t believe Hrant’s murderers will ever be interrogated in front of history. Who cares if they accounted for what they have done after everybody, especially the murderers, are dead anyway? I, for one, don’t care.

Hrant will make history with his courage, most probably. I would like history to remember him this way. He was a compassionate reminder.

A person who hangs on to the joys of life in spite of the cruel tyrants.

A man who can think in fairness.

A “minority” member who tears his own flesh to be just and fair.

This is a country which kills out of shame. Not itself, though. The culture of this country doesn’t know self-punishment. It punishes others. Kills women. Kills children. Kills animals. Kills people. Kills all who don’t cooperate. The enemy is always considered an outside an outsider. This country thinks it’s standing strong on its feet by acting like this. It assumes this can go on. It considers standing as survival and survival as life itself. In this world of struggle for survival, there is no place for elegance or compassion. They invite us to be humans and stay as humans. They make things harder because they don’t want anything in return, their only demand is truly, sincerely, only humanity. They disturb the system because they don’t accept the laws of antagonism and their only claim is for humanity. If they had asked for something else, anything else, the results would have been different, for there is a way of “handling” every other requirement. However, they insist on demanding honesty, the most impossible of all. An unsolvable situation for this country as this country doesn’t know how to deal with the shame that will come out of honesty. This country doesn’t know how to deal with shame. It doesn’t know how to apologize just like it doesn’t know how to be thankful.

Still, Hrant is a sign. A sign that the circle of forgetfulness has come to an end, that there is no place left for those who want to forget. The circle is closing on a logic that is based on forgetfulness, the history of oblivion. Hrant is the point where remembering starts, where there is nowhere else to go.  His life was just that, so is his death.  Hrant is a sign to remember, a sign to look back for guidance for those who want to remember in the name of honour. For he proposed a way of reminding. He did it in a graceful, affectionate way. He told us all about how to carry the burden of shame, how that burden would feel lighter shouldering it with the likes of us. Actually, this is a very terrifying fact for those who insist that burden is unmoveable. Hrant told us that it was not all about shame but also about the future. This is the end of the history of oblivion. A breaking point. A possibility. A fissure.

He is right there. Not where he was  murdered. In the part of history where he used to live. Where he had his voice. It is a landmark. A place to turn back and look for guidance. A place to step on before a jump towards the future. Without  burden. First shouldering that burden then getting rid of it.

*: An expression used by the poet Haydar Ergülen for his fellow poet Gülten Akın.