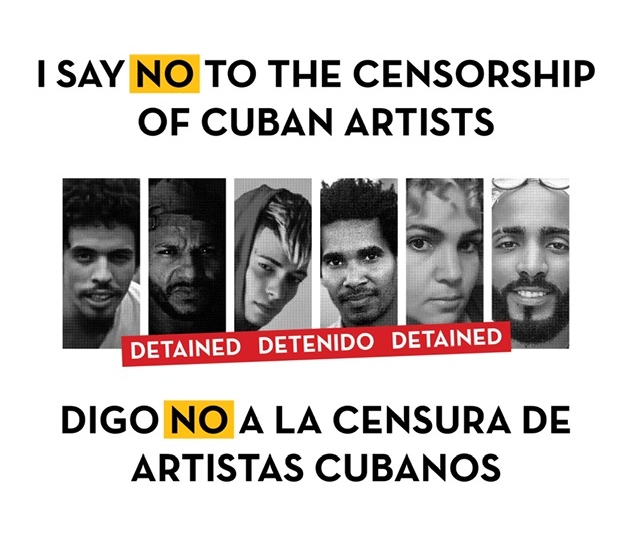 The undersigned organizations and artists strongly condemn the unsubstantiated and outrageous charges relating to alleged contempt, defamation, and public disorder brought against Cuban artists Maykel “El Osorbo” Castillo Pérez and Luis Manuel Otero Alcántara, for which prosecutors have requested the punishment of ten and seven years imprisonment, respectively. We call on the Cuban government to drop these charges, release Castillo Pérez and Otero Alcántara, and put an immediate end to the constant harassment and abuse of artists.

Maykel Castillo won two Latin Grammys for his song Patria y Vida, which criticizes the Cuban government and became a viral anthem during the mass protests in July 2021. Otero Alcántara has become a prominent dissident voice through his powerful performance art. Both artists are members of the San Isidro Movement, a collective that has staged various protests against the government, leading to intense state surveillance. As a result of their art and activism, Castillo Pérez and Otero Alcántara have faced a sustained campaign of harassment and persecution since 2016. Most recently, Castillo Pérez was arrested on May 18 after the success of Patria y Vida, while Otero Alcántara was detained on July 11 following his participation in mass demonstrations during the July 2021 protests. Both have remained incarcerated in maximum security prisons ever since.

A formal court order initiating an oral trial was issued on March 8, 2022. The charges against Otero Alcántara include “insults to symbols of the homeland,” “contempt,” and “public disorder,” and the charges against Castillo Pérez include “contempt,” “public disorder,” “defamation of institutions and organizations and of heroes and martyrs,” and “assault.” The Artists at Risk Connection (ARC) at PEN America, PEN International, and CADAL have reviewed legal documents showing that the Prosecutor’s Office issued their sentencing request of ten years’ imprisonment for Castillo Pérez and seven years for Otero Alcántara.

A review of the charges against both artists makes it clear that they are being targeted for their peaceful exercise of their right to free expression. Their alleged criminal conduct includes using the Cuban flag in a series of photos, writing an offensive social media post, criticizing government officials, and posting memes about Cuba’s head of state. The cases against both artists are an obvious attempt to criminalize their art and their opinions. The goal of these charges has never been to administer justice nor to allow for free and fair discourse on issues of concern for the Cuban people, but to surveil, harass, detain, and silence those critical of the government.

These cases are part of the Cuban government’s broader campaign to intimidate, silence, and imprison artists and other creatives who dare to criticize them–a campaign marked by repression and human rights violations. Since the historic protests on July 11, 2021, Cuban authorities have pursued a series of unjust trials against those who took to the streets, many of whom are artists.

At least 39 artists were detained on July 11, and three were sentenced on charges of contempt: musician Abel Lescay, rapper-singer Randy Arteaga, and writer and poet María Cristina Garrido. The tactics employed by the authorities against dissenters–surveillance, harassment, detention, and silence–are both apparent and clearly abusive.

Castillo Pérez and Otero Alcántara were first arrested on May 18 and July 11, 2021, respectively, and remain in detention as their trial progresses. The long-term detention and extreme harsh conditions have taken a grave toll on their mental and physical well-being. Both Castillo Pérez and Otero Alcántara have faced worsening health conditions that require immediate medical attention. Following his most recent hunger strike in protest against his unjust imprisonment and the manipulation of his freedom by state security, Otero Alcántara told his family that he “suffered paralysis and had to be rushed to hospital.” His partner said his condition has worsened and he finds himself at “constant risk.” Castillo Pérez’s health has also drastically deteriorated as he awaits the results of a second biopsy conducted due to swelling in his throat and lymph nodes.

The Cuban government’s pursuit of criminal charges against both artists is not justice–it is oppression. We demand that the authorities drop all charges against both Maykel “El Osorbo” Castillo Pérez and Luis Manuel Otero Alcántara, and immediately release them from detention. We further call on the Cuban government to cease the harassment and threats against journalists, writers, and artists on the island, and to respect and guarantee international human rights law as set out in the Universal Declaration of Human Rights and other international instruments.