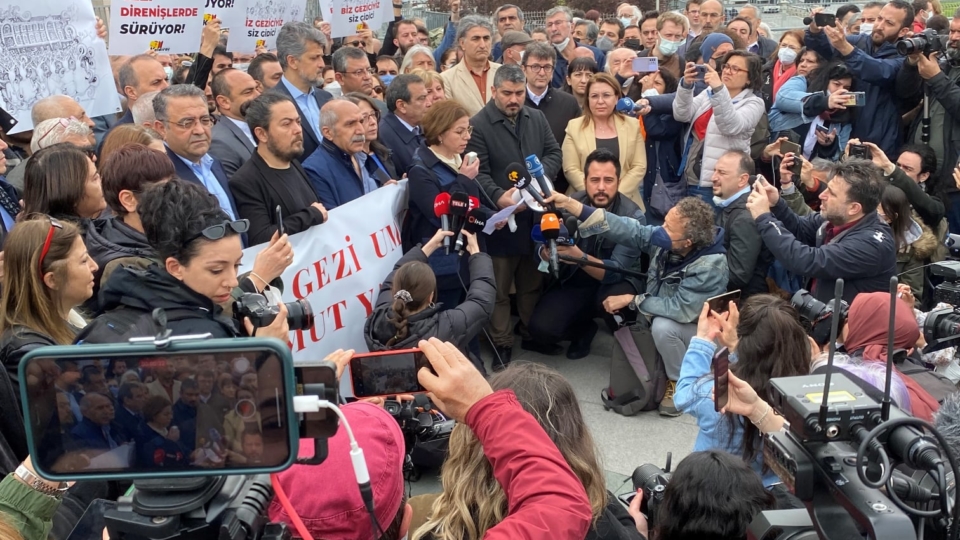 Friday the Gezi park retrial took place in Çağlayan courthouse’s 13th Istanbul High Criminal Court. The hearing was preceded by a statement to the press, given on the plaza opposite the court. Hundreds gathered to express solidarity with the defendants and as well as MPs from the CHP (People’s Republican Party) and HDP (People’s Democracy Party), the European Union Turkey Rapporteur MEP Nacho Sanchez Amor, the EU Delegation to Ankara and consular and embassy staff from several European countries were present. PEN Norway’s five-person delegation was present along with PEN International President Burhan Sönmez and members of Kurdish PEN and PEN Turkey.

The defendants in this case, which has continued for over 4 years, are charged with having financed and organised the spontaneous and country-wide Gezi park protests of the summer of 2013 when thousands of people occupied the Gezi Park in central Istanbul to protest the removal of trees. The Taksim Dayanışma Platform, members of which were on trial today, was set up to legally contest the building of an illegal road through the Gezi park and held meetings where they led non-violent protests in the park.

Defendants Mücella Yapıcı, Çiğdem Mater, Hakan Altınay, Mine Özerden, Can Atalay and Tayfun Kahraman and Yiğit Ekmekçi were present in the room and gave their final defence statements in this trial. All defendants were acquitted of the charges of attempting to bring down the state through violent means in the verdict hearing in January 2019. Despite this, the decision was overturned at the Regional Appeal court and a retrial ordered.

At today’s hearing, each defendant repeated their rejection of this case and demanded their full acquittal. They repeated their statements that the case file contains not one piece of evidence; that the prosecutor who wrote the indictment has been convicted for membership of the Gülen movement and further, has admitted that there were fabricated parts to the original, 657 page indictment.

Defendants repeated their insistence that the case was politically motivated and that many aspects of the case were unconstitutional and in contravention of domestic penal and procedural law in Turkey. One stated: “For you judges as legal professionals to allow this case, in which the former judicial panel acquitted defendants in January 2019 and in whose reasoning stated that all were acquitted on the basis of insufficient evidence – for you to hear this case and allow it to go on is an insult to your profession and to Turkey itself.”

At 14.15 the only detained defendant in the case, businessperson and human rights defender Osman Kavala gave his defence statement via video link from Silivri prison, where he has been detained for 4.5 years, despite an European Court ruling on December 10, 2019 for Kavala’s immediate release. The court found his pretrial detention to be a violation of his rights to liberty and security and found also a violation of Article 18, claiming that the judicial proceedings contained possible political motivation. Despite a Council of Ministers decision in 2021 clearly demanding Kavala’s immediate release upon threat of the beginning of proceedings to remove Turkey from the Council of Minister

“I was openly against the government’s illegal Gezi park development project. I attended meetings and actively protested the building of a road through the park. None of my actions or meetings or expressions in relation to this constitute any kind of evidence of illegal activity. I see them all as legitimate civil participation actions.”

After my arrest I waited 2 years for the indictment to be written. During that time no evidence was found. Illegal tape recordings and media reports were used by a prosecutor who has been convicted of membership in the Fetullah Gülen organisation and the case ended in acquittals in January 2019.

It’s understood that the President was unhappy at my acquittal and wanted me to remain in custody. As soon as I was released on bail, I was rearrested on unfounded allegations of espionage and a very strange indictment was prepared. My artistic and cultural activities were used as a basis by the prosecution to say that I had engaged in spying and had gained information that would lead to the attempted coup of 2016. I’m claimed to have organised this espionage so professionally that not one piece of evidence could be found.

He finished by saying: “I can never get back the four and a half years of my life that have passed in prison. There is only one benefit from this prolonged case and that is that it has clearly shone a spotlight on the serious problems in the judicial system in Turkey.”

Following Kavala’s statement lawyers for Yiğit Aksakoğlu and Ali Hakan Altınay defended their clients, also demanding why there was no evidence to back up these serious allegations against their clients.

They were followed by lawyer Tora Pekin at 15.24 who said: “It’s very hard to give a legal defence rooted in law in this politically and ideologically motivated case. There is an outcome from this case of which I’m sure – no matter the decision you reach, the law in Turkey and the judiciary itself will be the losers.”

The case continues with a verdict expected on Monday 25 April.