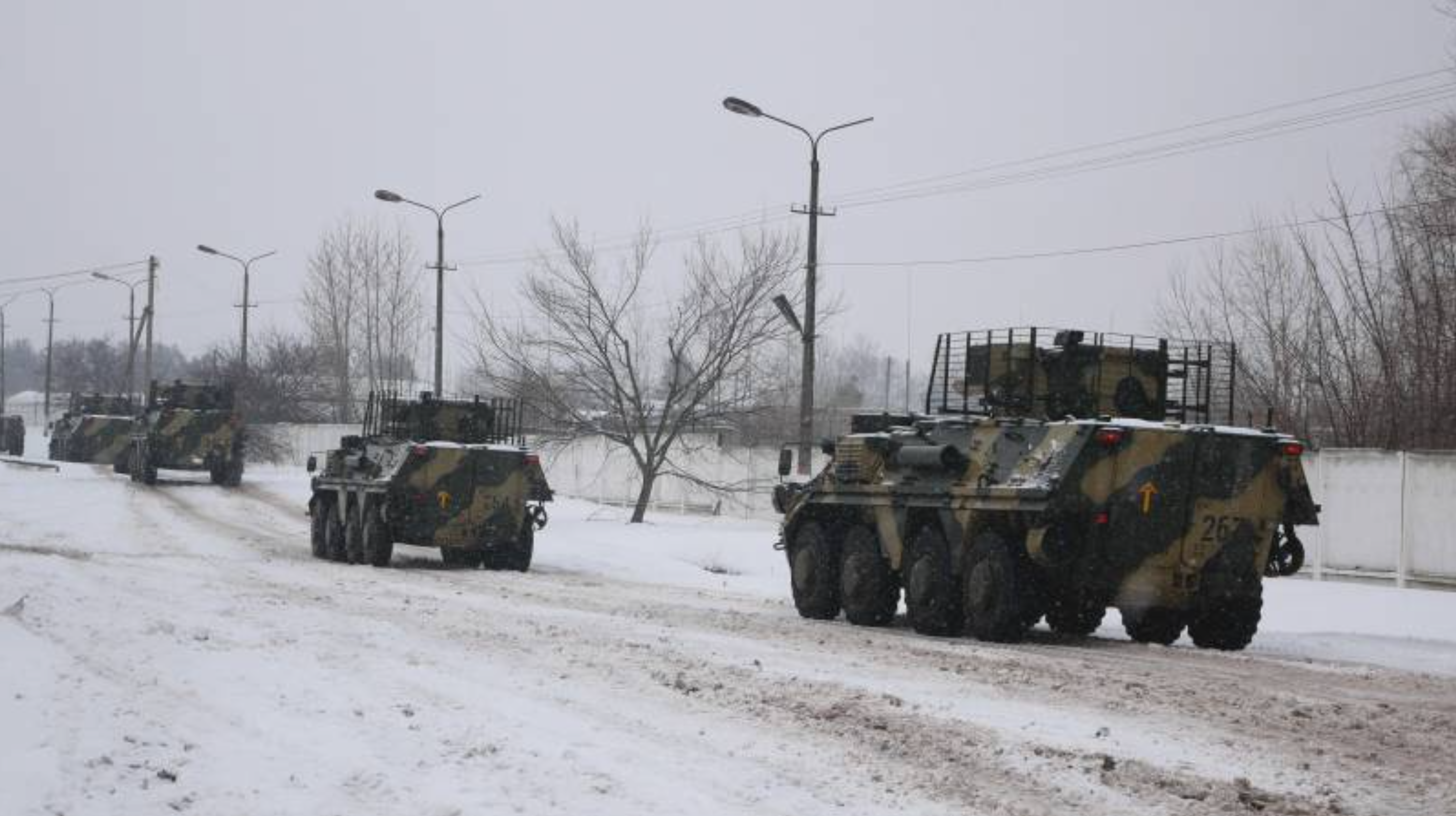 Kharkiv, Ukraine – January, 31, 2022: A column of armored personnel carriers rides on a winter road. Ukraine prepares to defend its country from Russian invasion.

PEN Norway with other PEN centres call for a peaceful solution that respects the rights to all in Ukraine, through peaceful dialogue and full respect for freedom of expression.

PEN Norway, alongside PEN International, the worldwide association of writers, and PEN Ukraine are gravely concerned about the rapidly deteriorating situation in Ukraine, with Russia ordering troops over the Ukrainian border and threatening to escalate the use of military force. We call for a peaceful solution that respects the rights to all in Ukraine, through peaceful dialogue and full respect for freedom of expression, in line with the PEN Charter.

Eight years since Russia’s unrecognised ‘annexation’ of Crimea in violation of international law and the de facto control by pro-Russian armed groups of the self-proclaimed ‘republics’ in the Donbas, the human rights situation in Ukraine continues to raise severe concerns. Over 14,000 people have been killed, nearly 1.45 million people have been internally displaced, and scores of journalists have been detained, kidnapped, tortured, or otherwise harassed solely for carrying out their work. Violations of international human rights and international humanitarian law – or the laws of war – in occupied Crimea persist. Meanwhile, Russia has been accused of being behind a string of cyber-attacks against Ukraine, which recently targeted its defence ministry. On 17 February 2022, the shelling of schools and residential areas in the Donbas injured civilians and damaged civilian infrastructure. On 21 February, President Putin recognized the self-proclaimed ‘Donetsk People’s Republic’ and ‘Luhansk People’s Republic’ as independent states – in breach of international law – and sent in troops, ostensibly as ‘peacekeepers’.

‘All individuals have a right to peace, free expression and free assembly. Ukrainian people have already suffered eight long years of violence, including military aggression, sophisticated information warfare and occupation of part of the Ukrainian territory by Russia. As PEN members, we abide by our Charter and pledge ourselves to do our utmost to dispel all hatreds and to champion the ideal of one humanity living in peace and equality in one world. We are deeply concerned by the worsening situation in Ukraine, and the threat that further bloodshed would have on all people in Ukraine and to the peace, security, and hopes of all throughout the region. We call once again on all parties to do all within their powers to ensure a peaceful resolution to the armed conflict in Ukraine through peaceful dialogue and end the use of propaganda that is fueling the violence’, said Burhan Sonmez, PEN International president.

‘The hybrid war waged by Russia against Ukraine for eight years is now turning into a conventional one, in which casualties among soldiers and civilians could number in the hundreds of thousands. Europe has not been able to defend European values on its territory, of which Ukraine is a part. We are no longer at the edge of the abyss; we are already holding one foot over it. If the leaders of the free world do not make a last decisive attempt to stop the war that the Russian Federation so wants to unleash, it will be safe to say: the Second World War taught humanity nothing! I appeal to all free people of our planet – do everything possible to protect the freedom and independence of Ukraine. There can be no free and safe Europe without a free and independent Ukraine!’, said Andriy Kurkov, PEN Ukraine president.

We deplore the threat to peace and free expression caused by President Putin’s refusal to accept the rights of Ukraine’s people to debate their future allegiance and history without Moscow’s interference. The annexation of Crimea, the crossing of troops in the Donbas, and his unwarranted concentration of forces in the region, whether along Western borders or in the Black Sea, must cease. The sovereignty, independence, and territorial integrity of Ukraine ought to be respected. Multi-lateral fora for the avoidance of conflict and misunderstanding should be used, and freedom of expression and access to information both in Ukraine and Russia fully protected.