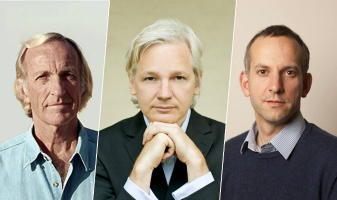 Is there an escalating war of information that is threatening our democracy and our ability to make informed decisions?

Call it propaganda, fake news, bias or distorted facts—manipulation of information may have vast implications for people trying to make sense of the world. While politicians and media actors accuse each other of undermining the truth and stirring up the public’s emotions with questionable assertions, it is often unclear whose interests lie behind the narratives and whether or not the news are truthful descriptions.

In many countries, even the less subtle forms of propaganda will often be an accepted part of everyday life. Yet, even in Europe and the US, the War of Information now seems to be escalating beyond what we have previously seen. “All wars always produce phony atrocity stories – along with real atrocities,” writes journalist Patrick Cockburn, “But in the Syrian case fabricated news and one-sided reporting have taken over the news agenda to a degree probably not seen since the First World War.”

Add to this the chaotic world of social media and online news outlets, where it is hard to know whom to trust, particularly when we know that both state actors and private interests are working continuously to promote narratives that work to their own advantage.

The Holberg Debate 2017 seeks to explore various aspects of propaganda and distorted information in the news and social media, including:

• Can voters be expected to make informed decisions in the presence of propaganda?
• Are the established media hypocritical when they define themselves as the guardians against “fake news”? And who are the most powerful actors in what may be seen as a global theatre of information warfare?
• How much should we trust the media in issues of war, peace, power and politics? Were there for instance dark, foreign forces behind the surging French ‘populists’ and the British Brexit campaign? Was the regime change in Ukraine a popular revolution or a US supported coup? And was the US election hacked and stolen by Russian spies?
• Are the bombs that have fallen over countries such as Syria, Iraq, Afghanistan, Libya, Yemen and Pakistan part of great humanitarian projects, or are there ulterior motives that the media either wilfully obscure or are manipulated into distorting?
• Is the future of humanity under threat from propaganda controlled by artificial intelligence?

The event is a collaboration between the Holberg Prize, the Fritt Ord Foundation and Norwegian PEN (Western Norway). We are also grateful to the Bergesen Foundation and the University of Bergen, whose support helped make this event possible.

JULIAN ASSANGE joins the panel via videolink. Assange is an award-winning journalist and the founder and editor-in-chief of WikiLeaks. He is also a programmer, cryptographer, author and activist. Founded in 2006, WikiLeaks has published millions of leaked documents and several videos. This includes logs that relate to the wars in Iraq and Afghanistan, the controversial “Collateral Murder” video from Iraq, U.S. diplomatic cables, and election campaign related e-mails from the Democratic National Committee and from Hillary Clinton’s campaign manager, John Podesta.

JOHN PILGER is an Australian journalist, author and documentary film-maker. Pilger has covered military, political and cultural conflicts around the world for more than five decades, and his criticism of American, Australian and British foreign policy is strongly reflected his documentaries and writings. He worked at the Daily Mirror from 1963 to 1986 and wrote a regular column for the New Statesman magazine from 1991 to 2014. Pilger has won numerous awards as a journalist and film-maker, and he is one of only two people to win British journalism’s highest award twice.

JONATHAN HEAWOOD is the CEO and founder of IMPRESS, the only press regulator to be recognised as independent and effective under the Royal Charter in the United Kingdom. He has previously worked as a journalist and human rights campaigner, and he is a former director of English PEN. Heawood has written on free speech and regulation for various publications, including The Encyclopedia of Twentieth-Century Fiction, Critical Quarterly, Journal of Media Law, Ethical Space and Communications Law.

The debate will be moderated by Professor Ellen Mortensen, University of Bergen. Ole Sandmo from the Holberg Prize Secretariat will interview Julian Assange during part of his appearance. In addition to keynotes from the panellists, there will be Q&A sessions where members of the audience will be welcome to ask questions.

The event will not be streamed outside the University Aula.

Please note that recording of this event via any media type is strictly prohibited.