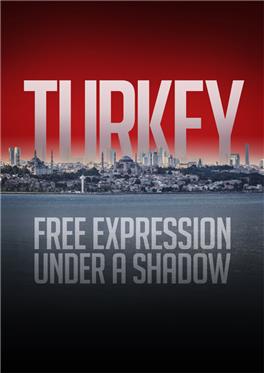 Turkey: Freedom of Expression Under A Shadow

In November 2012, a delegation of writers from PEN International, the world association of writers, visited Istanbul and Ankara to raise long-standing concerns about the state of freedom of expression in Turkey.  During the visit, the writers met with Turkey’s then President Abdullah Gül. The discussion was frank. Among the topics raised were:  the large numbers of writers then in prison and on trial; the use of anti-terror legislation to stifle dissent; writers who had served years of untried detention; and suppression of the Internet. The meeting was amicable and Gül gave assurances that he was following the situation closely. He made an important observation, that he recognised that freedom of expression in his country was problematic, saying:  «There are many good things unfolding in Turkey, but these concerns cast a shadow over the progress we are achieving.»

In November 2014, the Norwegian PEN Centre is presenting a report which explores how the situation for freedom of expression has developed since the visit in 2012. It gives a time line of the tumultuous events of the  past two years including the Gezi  protests that broke out in May 2013; the corruption and wiretapping scandals that dominated the headlines in late 2013 and early 2014; the February 2014 judicial reforms that led to the release of several writers held for many years in pre-trial detention;  the tightening of controls on digital media that followed;  and the March local and August  Presidential elections.

The main part of the report gives space to the views of writers, NGO activists, journalists, publishers and students from across the political and religious spectrums who were interviewed for the report in early 2014 to find out how they saw the state of free expression in their country, giving voice to those who live under the free expression ‘shadow’.  They gave their opinions on questions including what, if anything, had been done to improve the state of affairs since November 2012? What was the impact of the intervening months’ political turmoil on people’s capacity to speak out? What were their hopes for the future?

The report concludes with a review of PEN’s concerns in 2012, using the time line of events, and the comments from interviewees, to make a comparison with the situation today. Findings include that the despite that the number of writers and journalists in prison has dropped from over 80 in 2012 to less than 20 today, the total number on trial remains unchanged as many of those freed are still on trial, and new trials have opened, notably on charges of defamation. Anti-terror legislation remains problematic for free expression, and there are a multitude of other laws that penalise free speech, as restrictions on the internet harden. Anxieties around self censorship and hate speech were also raised by interviewees.

The ‘shadow’ that places restraints on freedom of expression remains as critical a concern in November 2014, as it did two years earlier.