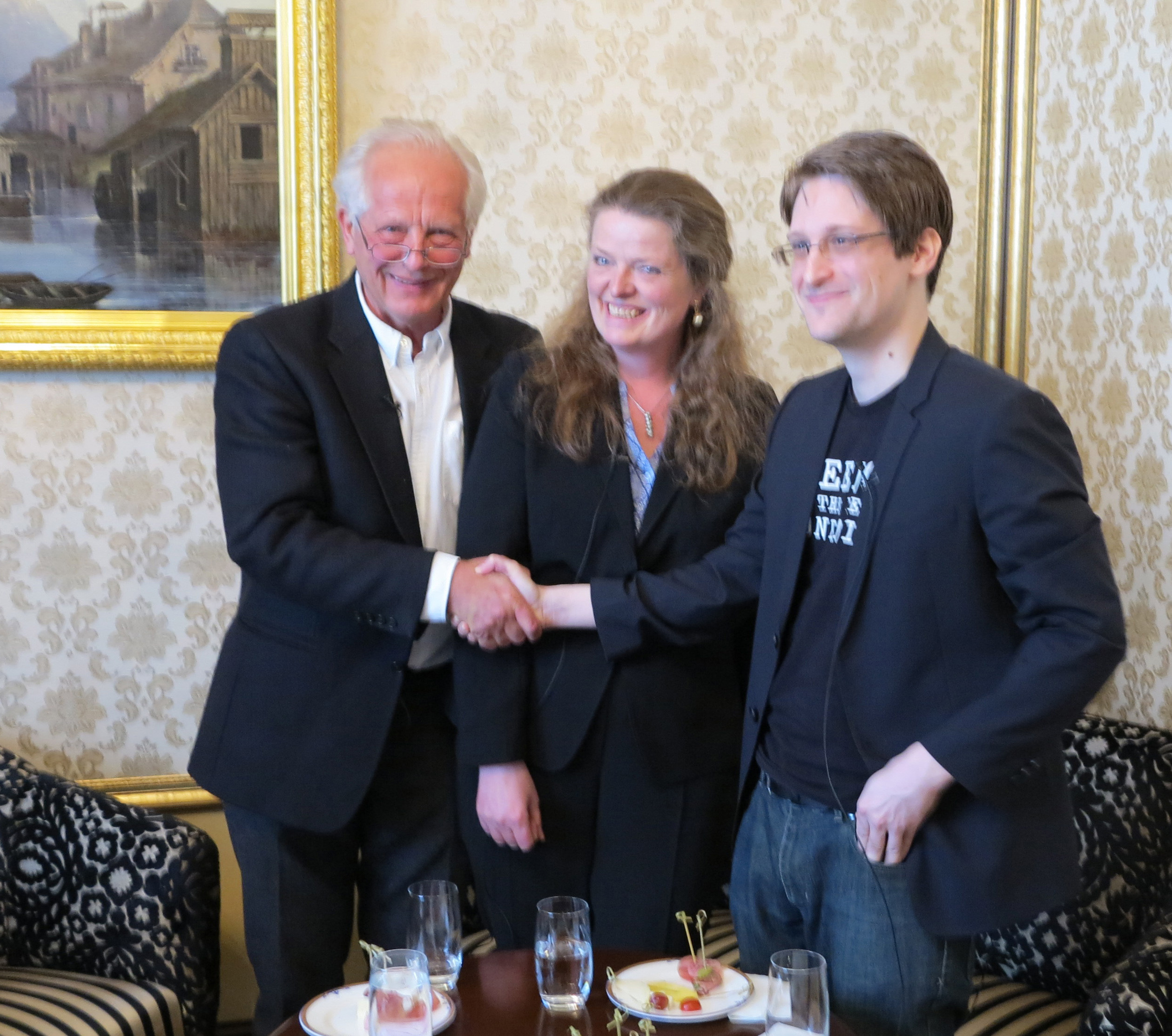 «I’m grateful for the support from Norwegian PEN,» said Edward Snowden when he received the award, a lithography by Norwegian artist Nico Wideberg.

On April 21, it had been a year since Edward Snowden filed a lawsuit against the Norwegian state together with Norwegian PEN. The lawsuit was filed in order to allow Snowden to travel to Norway without fear of extradition to the US, where he faces decades of imprisonment under the Espionage Act. Norwegian courts dismissed the case, the final dismissal fell in the Supreme Court in November 2016.

As a plan B, Norwegian PEN would go to Moscow and hand over the prize to Snowden personally. Last week, William Nygaard and Hege Newth Nouri traveled to Russia and met Edward Snowden. Accompanying Norwegian PEN were Snowden’s Norwegian lawyers from Schjødt Advokater and journalists from the Norwegian Broadcasting Company, who have followed the case the last year. The meeting took place in a hotel in Moscow.

Edward Snowden arrived a little late. He explained that the bus was so crowded he had to wait for the next. He lives an almost normal life in Moscow, but at the same time he has isolated himself in the Russian society. He has chosen this way of life because he once again hopes to return to his native country and be brought to justice in the United States in a fair and impartial trial. Snowden will be tried under the so-called Espionage Act of 1917, a law which is unacceptable according to international human rights standards. This First World War law will condemn him to life imprisonment without a jury and defense, a sentencing he will serve in a high-risk prison under extremely severe conditions.

Edward Snowden explained that he spends most of his life online, digital communication is both his profession and way of life. He teaches via skype at several universities and holds speeches all over the world. Edward Snowden is also board of directors in the organisation Freedom of the Press Foundation, an NGO that works to protect and support freedom of speech and freedom of the press.

We talked about the drone warfare, international law, the protection of whistleblowers, Trump and Putin, love and everyday life in Russia, future prospects, but most of all we talked about the issues that Snowden has fought for for almost four years in involuntary exile: how to secure and strengthen individual privacy, whistleblowers, journalists and others’ ability to communicate securely.

Snowden has a leave to stay in Russia until 2020, but his future is as uncertain as it was in 2013. Norwegian PEN, together with his Norwegian lawyers, will assist Edward Snowden if he wishes to apply for asylum in countries other than Russia.

Norwegian Broadcasting Company has followed Norwegian PEN through the last year’s work to give  the Ossietztky Prize to Edward Snowden in Norway. Watch their documentary «Snowden plan B» on Tuesday 2 May at 21:30/9.20 pm.

12. juni: The price of free speech in Turkey- A conversation with Leyla Zan...
Scroll to top